What Locker Rooms Should Boys Who Identify as Girls Be Allowed to Use? South Dakota’s Answer Respects All 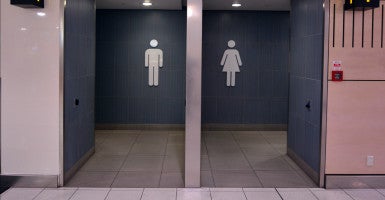 Controversy has flared up in South Dakota this week over whether biological males who identify as female should have access to girls’ bathrooms, lockers, and showers in schools. In the wake of the Supreme Court’s redefinition of marriage, the left has shifted its attention to the issue of gender identity, but it is meeting compassionate resistance.

On Tuesday, the South Dakota Senate passed the Student Physical Privacy Act. It’s a bill that protects the privacy of all students in South Dakota’s public schools system by making sure girls are not required to change or shower in front of boys and vice versa.

The only reason this proposal is controversial comes back to the fight over how exactly one defines a girl or a boy. Sensitive to the emotions surrounding this issue, the bill requires schools to accommodate students who don’t identify with their biological sex by providing them reasonable access to alternate facilities, such as unisex bathrooms or private changing rooms, if requested by their parents. As a result, students that identify as transgender will have more options than those who do not. Yet this reasonable balance has not placated the left, which is trying to bully South Dakota into reversing course under the charge of “discrimination.”

It’s important to note that the people of South Dakota did not pick this fight. It was thrust upon them by bureaucrats in Washington, D.C. The Department of Education has been going around the country threatening local schools with revocation of federal education funding if they do not treat students according to their “internal sense of gender,” which, under proposed rules from the Department of Health and Human Services, would mean not just male or female, but also “neither, both, or a combination of male and female.”

Of course, the American people never voted to nationalize local school bathroom policies, and many people may not even know what gender identity means (and who can blame them when the definition keeps shifting?). Nevertheless, the Department of Education has reinterpreted bans against sex discrimination in Title IX—a civil rights statute passed almost 45 years ago—to now cover gender identity and has used this sleight-of-hand to intimidate schools at all levels into adopting the new gender ideology or risk losing education funds for their students.

In order to shield local school boards from unjustified federal pressure, the South Dakota legislature is justified in clearly and consistently acting to protect the interests of its school children now—in a balanced way that is sensitive to all sides of the issue.

Would the Obama administration really cut school lunch programs or assistance for students with disabilities because South Dakota won’t allow biological boys unrestricted access to girls’ showers yet accommodates transgender students in other ways? Would any court uphold such a move?

We might find out soon enough, but in the meantime, the people of South Dakota are not alone. Last November Houstonians repealed their gender identity “bathroom bill” by a vote of 61 percent in a referendum. Students in school districts facing the same questions as South Dakota have spoken out in favor of privacy. Victims of sexual abuse have explained that, while they are careful not to associate transgender people with predatory behavior, they cannot deny that seeing any stranger of the opposite sex undressing in intimate settings can be traumatizing and trigger memories of past abuse. Their voices deserve to be heard, too. And we are already seeing allegations of men who might not even identify as women taking advantage of laws that have mandated access to locker rooms and bathrooms based on gender identity.

The people of South Dakota, like those elsewhere, are legitimately concerned about safety and privacy, especially when it comes to children, but they are also concerned about treating everyone fairly, including people dealing with gender dysphoria. South Dakota legislators have struck a balance that respects all concerned and shines a clear path out of a tricky issue. They should be commended and copied.