8 Tributes to Antonin Scalia From His Fellow Justices 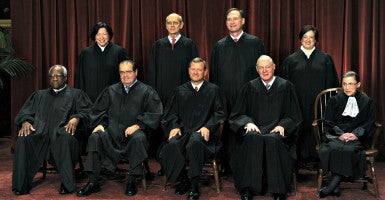 His eight colleagues on the Supreme Court reveal their affection and admiration for Antonin Scalia in the statements they released within 48 hours of the news of his death.

The most poignant, perhaps, is that of Justice Ruth Bader Ginsburg, arguably the high court’s most liberal justice, who emphasizes that she and “Nino” Scalia, arguably the most conservative, were “best buddies.”

“He was a jurist of captivating brilliance and wit, with a rare talent to make even the most sober judge laugh,” Ginsburg said in her formal statement, adding:

The press referred to his ‘energetic fervor,’ ‘astringent intellect,’ ‘peppery prose,’ ‘acumen,’ and ‘affability,’ all apt descriptions. He was eminently quotable, his pungent opinions so clearly stated that his words never slipped from the reader’s grasp.

Here are excerpts from what his fellow justices had to say about Scalia, who died in his sleep Saturday. (The complete text of each may be found at SCOTUSblog.)

Note: Statements by three of Scalia’s former colleagues on the court—Sandra Day O’Connor, John Paul Stevens, and David H. Souter—also may be found at SCOTUSblog.

>>> 9 Zingers From the Sharp Mind of Antonin Scalia