Congress Needs to Fix Disability Insurance (for Real This Time) 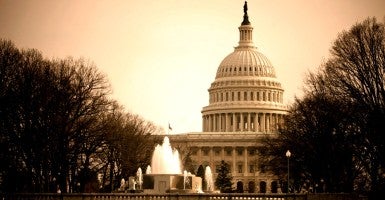 The longer Congress waits, the more people become dependent on a program that cannot afford to provide the benefits it has promised. (Photo: istockphoto)

And now it’s on track to ignore the program’s problems again.

Sen. James Lankford, R-Okla., and Joe Manchin, R-W.V., have sent a message to their Finance Committee colleagues: Don’t make the same mistake twice. That is, don’t kick the can on disability insurance reform until the program runs out of money again.

Lankford and Manchin weren’t in Congress the last time it used Social Security to bail out the disability insurance program, but some of the Senate Finance Committee members to whom they addressed their letter were.

Despite the resulting 50-percent increase in the disability insurance payroll tax, the Social Security Trustees warned Congress in 1995 that it must act quickly to reform the program or it would run out of money again in 2016.

Fast-forward to 2015 and—surprise, surprise—the disability insurance trust fund was on track to run out of money in 2016!

Congress had to act to prevent a 20-percent cut in benefits, robbing Social Security of $150 billion to keep the disability insurance program afloat through 2022. Worst of all, Congress buried the provision in the Obama-Boehner spending deal.

Yes, that’s how the story went.

Now, with the looming threat of insolvency and benefit cuts gone, Congress appears to have once again turned its back on real disability insurance reform.

Instead of just waiting until the disability insurance program runs out of money again in 2022, and once again shifting money from Social Security to keep Disability Insurance solvent, Lankford and Manchin are urging their colleagues to work to permanently fix the program.

Disability insurance reform may be a heavy political lift, but there’s no shortage of research examining the program’s many problems and proposed solutions. As Lankford and Manchin concluded:

A good faith effort needs to be undertaken to examine all of these proposals to address the problems facing the program in total: reform is needed for the SSDI application and adjudication process to ensure fair and more timely hearings; correction is needed where SSDI overlaps with other federal programs; continued fraud and overpayments to individuals who are no longer disabled must be addressed; and, ideas to intervene with applicants early and encourage a return to work must be examined to ensure applicants receive the support they need to either achieve benefits or re-enter the workforce. We must work to strengthen this program so that it continues to be financially strong for the individuals who are truly in need.

Thus, the longer Congress waits, the more people become dependent on a program that cannot afford to provide the benefits it has promised, and with the Social Security Trust Fund on track to run out of money in 2035, there’s only so long that Congress can keep robbing Social Security to prop up disability insurance.