The Dirty Little Secret of How Teachers Unions Stay in Business 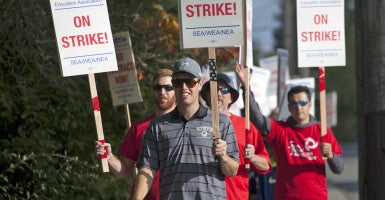 Evan Grossman is a Philadelphia-based education reporter for Watchdog.org, a national network of investigative reporters covering waste, fraud and abuse in government. Watchdog.org is a project of the nonprofit Franklin Center for Government & Public Integrity.

Less than 1 percent of Pennsylvania public school teachers have formally approved of the unions representing them, and teachers unions from Erie to Philadelphia have not been elected by their members for more than four decades.

That should change, according to a blistering policy brief published by the Commonwealth Foundation, a free-market think tank that’s calling for labor law reforms that would give workers a greater voice in who represents them.

“In presidential and congressional races, Americans are accustomed to selecting leaders every two to four years,” according to the report. “For labor organizations, which affect every aspect of government employees’ working lives, regular elections should also be mandatory.”

The Public Employee Relations Act of 1970 established the ground rules for how labor unions can win the right to represent public employees like teachers and municipal workers in Pennsylvania. A union can be “certified” or officially recognized as a representative through a joint employer-employee request for certification when a majority of workers support a particular union.

“The deck is stacked against public employees and in favor of public union executives,” Commonwealth policy analyst Bob Dick says.

Pennsylvania teachers are typically represented by either the Pennsylvania State Education Association or the American Federation of Teachers. Neither union responded to requests for comment.

Of 488 Pennsylvania school districts polled by Commonwealth, 429 have not held a certification election since 1971.

“That’s the result of the way the law was written, to make it difficult to hold these elections,” Dick said. “The result of that is at the school district level and at the state level, you have public employees who are represented by unions that they never voted for.”

In 2011, Wisconsin reformed its labor laws, mandating that public-sector unions be certified every year.

According to Pennsylvania labor law, if 15 percent of union employees want a different organization representing them, an election can be held to appoint a new representative.

If employees want to decertify their existing union, they must petition the Pennsylvania Labor Relations Board and demonstrate that 30 percent of the workers in their bargaining unit are interested in a decertification election. These requests can be made only during a 30-day window when a collective bargaining agreement is on the verge of expiration.

“The law is written so it’s stacked against public employees and it’s a burdensome process just to hold an election,” Dick said. “There is nothing in Pennsylvania labor law that requires these unions to stand for an election.”

Similar to other labor unions around the state, the Erie teachers union has not been recertified by the state to represent teachers in the district since 1970. There are no teachers working in the district that were on the job then, just as there are no active teachers working in Philadelphia, Allentown, Reading, North Penn, Council Rock, and several other districts who were on the job the last time those union certifications were voted on.

“It’s about amplifying the voice of public employees in the workplace,” Dick said. “Should it be made easier for them to hold their unions accountable? We would argue, yes.”