What Have Seven Years of ‘Hope and Change’ Actually Done for Americans? 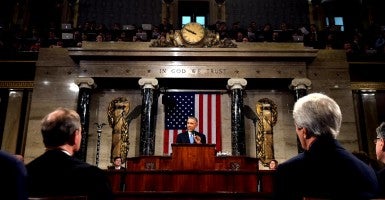 In his first State of the Union address in 2010, President Barack Obama made a promise to prioritize economic recovery. He implored Washington to “try something new.” He vowed to stop leaving Americans mired in “a mountain of debt” and promised to pursue policies that would help “rein in” the federal debt.

His final State of the Union is set to air tonight, and since his first address, voters have been hoping that 7 years of promises of hope, change, and economic recovery were more than just empty rhetoric.

Unfortunately, that is not the case. By just about every indicator, the president’s two terms have been an economic failure.

That mountain of debt he promised to rein in is now larger than it has ever been. The national debt was $10.6 trillion when Obama came into office in 2009. It now stands at $18.9 trillion—an astounding 80-percent increase in just seven years, the largest increase in history. Our government debt now eclipses the size of our economy.

Despite initially signaling that he was open to slowing discretionary spending—the portion of the budget controlled by annual appropriations bills—the president made ever more spending on discretionary programs a priority.

By working with a broad coalition in Congress, Obama was able to shatter the post-sequester spending caps he signed into law in 2011—one of the only measures that has been successful at limiting spending in recent years. Federal spending is now on pace to hit $4 trillion annually by the end of the president’s term, a sum that constitutes a fifth of the economy. Together with Congress, Obama has repeatedly raised the debt limit without making any spending reforms. The latest measure even suspended the limit until March 2017, effectively giving the Treasury a blank check to borrow until then.

The president has noted that even though debt and spending have skyrocketed, deficits are down to their lowest level since he took office.

This is true. But for this, you can mostly thank Congress for imposing the budget caps he has so vehemently opposed, as well as the taxpayers who restored revenues back to the historical average as the economy improved. And don’t be fooled by this temporary relief: The Congressional Budget Office estimates that on the nation’s current trajectory, deficits will return to trillion-dollar levels within a decade.

This trajectory has been exacerbated by the president’s refusal to engage on his campaign promise of entitlement reform—an agenda he effectively opposed by championing Obamacare and Medicaid expansion.

This unprecedented government spending was fueled by some of the largest tax increases in history. During Obama’s tenure, he has hit Americans with billions in payroll, capital gains and dividends, earned income, and death tax increases. The tax increases in Obamacare alone are expected to total nearly $800 billion through 2022.

But that’s not all. This administration has issued more major regulations than any of its predecessors. In just six years, the Obama White House has implemented 184 major regulations, costing the economy at least $80 billion annually while skirting the legislative process in favor of executive fiat.

What has all this spending, taxing, regulating, and new debt brought us? The slowest recovery since the Great Depression. The $800 billion stimulus did not generate the “shovel-ready” jobs that the president promised. Worse, this massive spending increase—and the tax hikes and debt that came with it—ended up hampering the recovery.

And while unemployment has undoubtedly fallen—as it does in any recovery—fewer Americans are in the work force now than at any time since 1977. This helps explain why the government unemployment figures are as low as they are.

So where have the folks who have stopped working or looking for work gone? Many have fled the job market in favor of the callous arms of big government. Total means-tested welfare spending now stands at over $1 trillion annually—the highest ever even though the recession supposedly ended in 2010. Over 45 million people—one out of every seven Americans—receive food stamps, a remarkable 63 percent increase since the height of the recession in 2009.

More and more working-age Americans continue to join the disability rolls and stay there. Five percent of working-age Americans now rely on disability benefits instead of a job—the most ever and a significant jump from 4.6 percent in 2009. Obama’s promise to focus on a true middle-class recovery has floundered in favor of building a state of perpetual dependency.

And remember those bank bailouts the president said he “hated”? He’s followed them up with a string of the government’s own bailouts. This past year, he signed off on a $70 billion taxpayer bailout for the highway trust fund, which until recently was exclusively funded by the users of our transportation system.

This came just a month after he advocated for a $150 billion bailout of the Disability Insurance program, “reallocating” funding from the Social Security retirement account that has far more unfunded obligations in the future. In both instances, these bailouts were far easier—and more politically expedient—than laboring towards real reforms.

Make no mistake: The overall result has been a continuation (indeed, an exacerbation) of business as usual in Washington: spending, regulating, and amassing more debt than ever before. The economy—and every American—is worse off for it.

What should be done? Change isn’t easy—but we need the next president to be one who will lead and work with Congress on these vital economic issues. They need to address the relentless growth of spending in order to begin to bring the nation’s debt into check. It’s a daunting task, but we must curtail the relentless growth of spending, taxes, regulations, and the national debt to ensure freedom and economic vitality for our posterity.