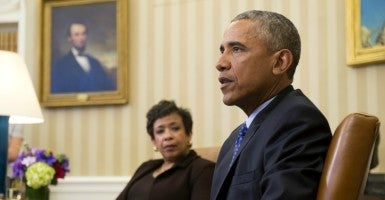 As Americans gathered with loved ones to wish each other a more prosperous new year, the president issued an edict to put that longed-for prosperity farther out of reach.

In a proposed federal rule published on New Year’s Eve, the president decreed that hundreds of thousands of additional foreign workers will be licensed to replace American workers at lower pay.

Congress must act with urgency to stop him.

The president’s nearly 200-page rule bypasses federal immigration caps, increasing significantly the number of foreign nationals authorized to work in the country above the limits set by Congress. These lower-paid foreign workers will be able to take jobs in technology firms, neighborhood pharmacies, energy companies, local schools, public administration, civil engineering, and innumerable other professions both sought and filled by millions of Americans. Whether young American graduates seeking that first job or longtime workers seeking that well-earned promotion, countless Americans will now find their chosen careers in jeopardy.

The number of aliens authorized to work in the United States each year is limited by law, according to the number of foreign work visas and green cards that are statutorily available. Under this breathtaking executive action, those limits set by Congress are waived.

First, it would simply approve as many aliens as it wishes to seek green cards in excess of the cap. Then, it would give those workers—and their spouses and children—a renewable all-purpose work permit while they wait for their green cards to become available, nullifying Americans’ statutory protections against job-threatening flows of excess foreign labor. Adding further to the pool of workers, it expands the number of H-1B visas exempt from the annual cap.

Brazenly, the proposed rule would also result in the automatic renewal of work permits for aliens who, among other things, merely file applications to have their deportations canceled or asylum granted. It is as if these policies were designed to create chaos and disorder.

This lawless action comes at a time when immigration is already at an all-time high. The total foreign-born population is at a record-breaking 42.4 million, having more than quadrupled since immigration caps were raised five decades ago. Excess labor supply has already helped drive down today’s median household income more than $4,000 beneath levels at the turn of the century.

Pew reports that Americans want immigration caps reduced—not increased—by an overwhelming 3:1 margin. That same Pew report shows that new immigration will add the population equivalent of 25 cities of Los Angeles over the next fifty years—unless Congress acts to reduce the annual allotment of visas.

But instead of answering the public’s demand to curb the intake of foreign workers, Congress has worked with the president to expand it—most recently in the omnibus spending bill. In fact, provisions I offered that would have helped to prevent this and other executive actions were rejected by those crafting the omnibus legislation.

Instead, the omnibus dramatically expanded the supply of H-2B foreign workers to fill positions in construction, hospitality, truck driving, and many other blue-collar jobs.

When it returns to session, Congress will have to decide: Will it take meaningful action to block the president’s new incursion, or will it continue making only empty gestures of opposition while acquiescing to the president’s agenda?

Voters want immigration growth halted. The more the governing class ignore these demands, the more they lose their authority to govern.