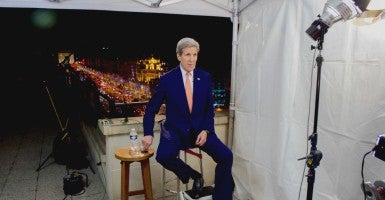 In an interview at the close of the recent Paris climate conference, Secretary of State John Kerry scolded Republican senators for saying out loud that the next president may not be a big supporter of President Barack Obama’s climate policies. Kerry asserted voters won’t allow a change, “I don’t think they’re going to accept as a genuine leader someone who doesn’t understand the science of climate change and isn’t willing to do something about it.”

But Kerry disproves his own theory. In a widely covered speech in Jakarta, Indonesia Kerry gave an absolutely cringe-worthy explanation of CO2 and global warming.

“I know sometimes I can remember from when I was in high school and college, some aspects of science or physics can be tough – chemistry. But this is not tough. This is simple. Kids at the earliest age can understand this.

“Try and picture a very thin layer of gases – a quarter-inch, half an inch, somewhere in that vicinity – that’s how thick it is. It’s in our atmosphere. It’s way up there at the edge of the atmosphere. And for millions of years – literally millions of years – we know that layer has acted like a thermal blanket for the planet – trapping the sun’s heat and warming the surface of the Earth to the ideal, life-sustaining temperature. Average temperature of the Earth has been about 57 degrees Fahrenheit, which keeps life going.”

He probably should have stopped with “physics can be tough.” His “a quarter-inch way up there” absolutely does not describe CO2 in the atmosphere. It seems what Kerry had in mind is a very abstract representation of the ozone layer. This may have been relevant a long time ago in a debate far, far away, but it is not a description of CO2 in the atmosphere.

His notion that the Earth has had a steady temperature for “literally millions of years” is also way off base. This National Oceanic and Atmospheric Administration webpage shows temperatures have bounced around by 10-25 degrees Fahrenheit ten or so times in the last 800,000 years.

Who knows what Kerry’s aides were thinking as he recited his mixed-up ozone lecture in the carbon dioxide forum? You can almost imagine them trying to catch Kerry’s attention, “Psst! We are talking about CO2, not O3.”