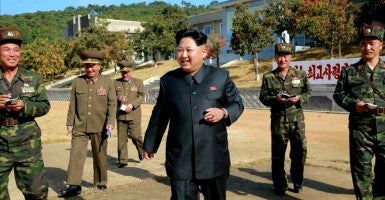 Twin events over the weekend dashed tremulous predictions that North Korea was seeking to improve strained relations with South Korea and China.

Pyongyang’s decisions to engage in senior-level talks with South Korea, and send Kim Jong-un’s hand-picked Moranbong band to Beijing, presaged (it was hoped) the regime’s intent to substitute parley for its typical pugnacity.

But such was not to be. The North Korean all-female Moranbong band was already in Beijing when the concerts were inexplicably canceled, and the troupe returned to Pyongyang. The concerts had been hyped by both countries as an indicator of warming bilateral relations.

Chinese officials cited only unspecified “communication problems” for the abrupt cancelation, but speculation includes Beijing’s requested toning down of the cult-of-personality hype of Kim in the show and North Korean displeasure at negative comments about their leader.

A Breakdown of the Inter-Korean Talks

North and South Korean vice ministers met at the Kaesong joint economic venture, a joint economic region between the two nations, to develop a plan to reduce military tensions and expand economic cooperation. The talks were the result of a deal in August to defuse a crisis triggered by North Korea’s incursion into the demilitarized zone and subsequent exchange of artillery fire.

The weekend talks foundered, however, over the inability to reach consensus on an agenda. North Korean representatives insisted on discussing only the resumption of the Kumgangsan tourist venture, a special region in North Korea for South Korean tourists, which has been a cash cow for the regime. South Korea called for standardizing family reunions and addressing North Korean denuclearization. Pyongyang subsequently declared that “prospects of North-South relations became even bleaker.”

The collapse of the two North Korean initiatives ensures the regime’s continued isolation. Pyongyang has again demonstrated that it is unwilling to compromise on core objectives, despite the resultant forfeiture of potential economic largesse. South Korea will continue efforts at dialogue, but President Park Geun-hye is unwilling to throw unconditional aid to North Korea in return for illusory improvement in relations or to secure an inter-Korean summit as a legacy.

The collapse of the two North Korean initiatives ensures the regime’s continued isolation.

Beijing is frustrated with the tension-raising antics of its troublesome neighbor, which precipitate U.S. and South Korean security responses counter to Chinese interests. But Chinese frustration has not led to greater pressure by Beijing on North Korea. Beijing objected to the U.N. discussing North Korean human rights atrocities.

With near-term hopes for dialogue dashed, there is growing concern that North Korea will no longer feel constrained from further provocations that the regime sees as increasing its leverage. While another tactical military clash is not expected, the possibility can never be discounted, particularly following the August landmine incident, which left two South Korean soldiers severely wounded.

Kim’s recent declaration that North Korea possesses a hydrogen bomb was dismissed by experts as beyond the regime’s capabilities. However, the North Korean leader may have been referring to a boosted fusion weapon, an easier technical achievement that would still augment the yield of North Korea’s nuclear weapons.

It will continue to be debated why North Korea’s attempts at engagement failed, and whether Kim will try again. But past experiences with North Korea show that there should be little optimism that dialogue can alter the regime. What remains is that the North Korean threat to the United States, and its allies, is very real and growing.