Why Won’t the Obama Administration Label the Massacre of Christians in Iraq, Syria Genocide? 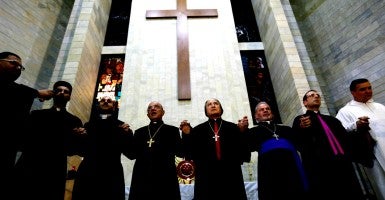 Priests offer prayers during a service for around 600 Iraqi Christian refugees at a church in Hazmiyeh, near Beirut. (Photo: Jamal Saidi/Reuters/Newscom)

Nadine Maenza is the executive director of Patriot Voices and is the chairman of Hardwired.

Tina Ramirez is the founder and presidnent of Hardwired.

The intent of the Islamic State (ISIS) is to eradicate all Christians from their self-declared “caliphate.”

This past May, ISIS Leader Abu Bakr al-Baghdadi released a video that made very clear their intent to destroy individuals who self-identify as Christians through whatever means possible, by death or forced removal. He stated that “coexistence with Jews and Christians” is impossible according to the Quran.

When ISIS entered northern Iraq and secured the city of Mosul in June 2014, Christians were a primary target. They were removed from public positions and cut off from public services and rations; within a month, they were given an ultimatum to “convert, pay the jizya tax, or die.”

ISIS’ intent was to bring about “conditions of life” intended to “destroy” the population—if not by killing them, then by making it impossible to remain in the region as Christians.

In 24 hours, the entire Christian population of Mosul had fled their homes. After 1,600 years of Christianity in Mosul, there are no Christians left.

In 24 hours, the entire Christian population of Mosul had fled their homes.

ISIS confiscated everything belonging to Christians; they left with nothing more than the clothes they were wearing. After the Christians were gone, ISIS began to destroy any trace of Christian history in the area. Churches and monasteries were confiscated, demolished, or turned into mosques.

After forcing Christians from Mosul, ISIS seized nearby Qaraqosh, which had the largest Christian population in Iraq. ISIS took the residents who did not flee and split them up on different buses, sending some out of the territory and “saving” some of the women for themselves.

We met Aida Hana Noah, whose 3-year-old daughter, Christina, was ripped from her arms while on a bus preparing to depart. She is now being raised as a Muslim in ISIS territory. We met and prayed with Aida for Christina’s safe return.

The genocide Christians are experiencing in Iraq and Syria needs to be identified as such so we can rally the international community to work together to stop the violence, provide support for the victims, and prepare to prosecute the perpetrators for war crimes and crimes against humanity.

Without the genocide designation, Christians in Iraq and Syria will not have access to the appropriate level of justice.

In 2001, Samantha Power, the U.S. Ambassador to the United Nations, wrote in The Atlantic that “[a] determination of genocide turns not on the numbers killed, which is always difficult to ascertain at a time of crisis, but on the perpetrators’ intent.”

Why, then, is the Obama administration about to exclude Christians or other religious communities from the declaration of genocide in Iraq and Syria?

Why, then, is the Obama administration about to exclude Christians or other religious communities from the declaration of genocide in Iraq and Syria?

Just last week, the State Department shared with us its plans to designate only Yazidis as victims of genocide.

Even President Barack Obama’s own ambassador at large for international religious freedom, David Saperstein, seems convinced that Christians are facing genocide in the region. He told The New York Times in June, “Everyone has seen the forced conversions, crucifixions and beheadings. To see these communities, primarily Christians, but also the Yezidis and others, persecuted in such large numbers is deeply alarming.”

Our organization, Hardwired, has a deep connection with the Yazidi community and agrees that ISIS has targeted them in horrific ways. In September, we brought a young Yazidi woman, “Bazi,” to the United States to tell of the atrocities Yazidis have endured and to raise awareness of the 3,000 girls and women still enslaved by ISIS.

Our hearts were heavy hearing her testimony to Congress of the day in August 2014 that ISIS invaded her village in Sinjar. They shot over 600 men and older boys (including 3 of Bazi’s brothers and her father), killed the older women (her mother being one of them), and eventually sold the girls and women to ISIS fighters as sex slaves. The young boys were forced to convert to Islam and prepared to fight for the Islamic militants.

Bazi’s story was unique because she was purchased by—and escaped from—an American fighting for ISIS, but other Yazidis and Christians experienced similar atrocities in Iraq and Syria.

U.N. Definition of a Genocide

Article II of the 1948 U.N. Genocide Convention says, “[G]enocide means any of the following acts committed with intent to destroy, in whole or in part, a national, ethnical, racial or religious group, as such:

The administration is choosing to take a very narrow view of the legal definition of genocide, seeking a single event, such as the massacre in Sinjar, to establish whether genocide has occurred. But the genocidal destruction of a group does not require that ISIS kill or cause death.

Each genocide, beginning with the Simele Genocide against Christians in Iraq in 1932, has brought this community closer to the point of extinction. If we ignore it now, this will likely be the death knell for Chaldean and Assyrian Christians in Iraq and Syria.

Christians in Iraq have dropped from 1.5 million just a decade ago to as low as 260,000. Over a thousand Christians have been abducted and murdered in around Aleppo in Syria, with ISIS holding 200-400 as hostages for ransom. A video recently showed the murder of three of those hostages, with the promise of additional executions to come.

While some in the administration have made the case that at least Christians have the option to stay and pay a “jizya” tax for being a non-Muslim, such measures are clearly intended to force Christians to convert or leave. Paying this tax is not a feasible option without work, government rations, or their hard-earned savings—all of which were confiscated. ISIS militants continue to raise the price until the Christian can no longer pay, and then they demand land or the women in the family.

The forced expulsion of Christians from northern Iraq and Syria, as well as the kidnapping, rape, forced conversion, and brutal crucifixions and beheadings of some in Syria, has caused grievous harm to the Christians in the region. Turkmen, Shabak, Kaka’i, and even Shi’a Muslims have faced genocide at the hands of ISIS as well. It cannot be ignored. Yet that is what the administration appears ready to do.

Current U.S. national security adviser Susan Rice said after the Clinton administration failed to intervene during the Rwanda genocide, “I swore to myself that if I ever faced such a crisis again, I would come down on the side of dramatic action, going down in flames if that was required.”

We believe that the time has come for dramatic action to protect and uphold the religious freedom of Christians, Yazidis, and all other persecuted religious communities in Iraq and Syria.

For more on this topic please join us at The Heritage Foundation for an expert panel “Christian Martyrs Today: Help for the Persecuted.”