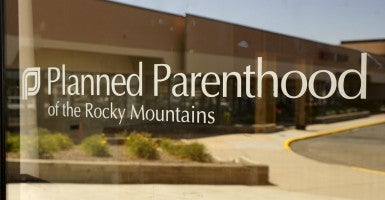 A lawsuit filed in Colorado alleges that Planned Parenthood accepted taxpayer funds from Colorado State University in exchange for the body parts of aborted babies.

Faith & Freedom Coalition of Colorado, the group behind the lawsuit, wants to force Planned Parenthood of the Rocky Mountains to return the money, Nick McIntyre, executive director, said in an interview with The Daily Signal.

Colorado State University paid as much as $160 per specimen, he said.

“This is happening in Colorado,” McIntyre said. “Not only has Planned Parenthood lied, they have used state funds for abortions and fetal tissue transactions.”

The affiliate did not immediately reply to The Daily Signal’s request for comment.

McIntyre said his group obtained records from Colorado State University through the Colorado Open Records Act that document a financial relationship among the university, the Planned Parenthood affiliate and Advanced Bioscience Resources. Those records include checks and invoices.

Public funding of abortion forbidden. No public funds shall be used by the state of Colorado, its agencies or political subdivisions to pay or otherwise reimburse, either directly or indirectly, any person, agency or facility for the performance of any induced abortion, PROVIDED HOWEVER, that the General Assembly, by specific bill, may authorize and appropriate funds to be used for those medical services necessary to prevent the death of either a pregnant woman or her unborn child under circumstances where every reasonable effort is made to preserve the life of each.

However, McIntyre said, the state government disregarded this provision and continued to fund Planned Parenthood “without legal justification.”

“That definition is wide and broad to protect Colorado taxpayers from funding something they may have a moral objection to,” McIntyre said. “It needs to be enforced. Not only can they not profit from this, they cannot be reimbursed.”

In a statement released last month when the suit was filed, university spokesman Mike Hooker said the school denied wrongdoing. Hooker said the university “obtained placental tissue from Rocky Mountain Planned Parenthood for research into healthy pregnancies,” as well as “properly obtained fetal tissue from other providers for important research into curing disease.”

Planned Parenthood of the Rocky Mountains is one of the affiliates featured in undercover videos released by the pro-life Center for Medical Progress. The videos raised allegations that Planned Parenthood clinics sell the body parts of aborted babies.

In the group’s fourth video, Dr. Savita Ginde, vice president and medical director of Planned Parenthood of the Rocky Mountains, is shown speaking to actors portraying buyers from a human biologics company.

“I think a per-item thing works a little better, just because we can see how much we can get out of it,” Ginde tells them in the video.

Profiting from the sale of human organs—including those of the unborn—is illegal in the United States. Spokesmen for Planned Parenthood Federation of America have denied that the organization and its affiliates profitin by illegal transactions.

The organization, the nation’s largest abortion provider, recently announced that it no longer will accept “reimbursement” for donations of body parts to researchers.

“We knew that Planned Parenthood of the Rocky Mountains is not up to high medical standards,” McIntyre said, citing a case involving the organization’s failure to report the sexual abuse of a 13-year-old girl.