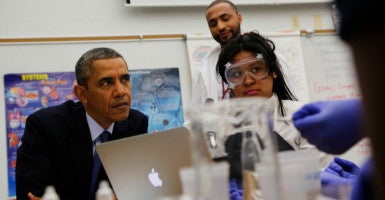 The proposal would maintain high levels of spending and dozens of ineffective programs, while at the same time creating even more new programs. (Photo: Aude Guerrucci/Polaris/Newscom)

There isn’t much for conservatives to love in the policies put forward in the proposed rewrite of the Elementary and Secondary Education Act reauthorization currently moving through Congress.

Proponents of the No Child Left Behind rewrite have argued that the proposal would prohibit the education secretary from encouraging states to adopt Common Core and would otherwise rein in the Department of Education.

On the Common Core question, states have already adopted the national standards and tests, and it is now up to states to fully exit Common Core. Moreover, there were already prohibitions in three federal laws against the federal government being involved in curriculum-setting. It is unlikely that yet another prohibition will change much.

In regard to the proposal’s potential for somehow restraining the Department of Education, we should first consider the amount of federal direction that is retained.

Although the proposal would end Adequate Yearly Progress (AYP) mandates, which required that all students in all states make “adequate” annual progress toward universal proficiency in math and reading or have the state risk federal sanctions, it retains the annual testing requirement that students be tested every year in grades three through eight and again in high school.

As was recently reported, states promulgate their own tests to assess students in advance of the federally mandated state tests, resulting in students in large districts taking an average of 112 mandated standardized tests by the time they graduate. The proposal would keep that structure in place. Regardless of what one thinks about the relative merits of standardized testing, federally mandated annual testing has a real effect on local school policy.

We should also consider the requirements included in the proposal for the new “state-based” accountability plans. Although less prescriptive than AYP, the proposal is specific about the types and the proportion of accountability options that must be included. Reports suggest that about 51 percent of a state’s accountability plan must be based on quantitative measures such as graduation rates and performance on state tests, and the other 49 percent may be based on other more subjective measures, yet undefined. Under the new proposal, states would also be required to:

As The New York Times reported, “officials from the White House insisted that states be required to intervene in the bottom 5 percent of schools based on a range of metrics including test scores, graduation rates and other measures of performance.”

The proposal would maintain high levels of spending and dozens of ineffective programs, while at the same time creating even more new programs. The absence of any Title I funding portability fails to empower low-income parents. The proposal is likely to maintain significant intervention by the Department of Education in local schools. There is not much for conservatives to love.