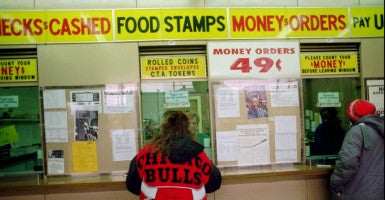 Elisa King waits in line at a Larmie Avenue currency exchange to pick up her welfare check and food stamps. (Photo: Val Mazzenga/KRT/Newscom)

As part of continued efforts by Gov. Scott Walker and legislators, welfare fraud and abuse legislation will be put to a vote on Tuesday in Wisconsin.

A series of four bills, three of which target abuse of Wisconsin’s food stamp program, are expected to pass.

The legislation (Wisconsin Assembly Bills 222, 200, and 188) would require the food stamp program in Wisconsin, FoodShare, to have photo identification cards for recipients, to limit the number of FoodShare replacement cards (a recipient could receive up to three replacement cards per year before being informed that he could become subject to investigation), and to remove benefits from inactive FoodShare accounts and unused benefits after one year.

“It is vital for the state of Wisconsin to ensure that our most vulnerable citizens have access to the support they need to provide for their families and build a better life,” state Rep. Dave Heaton said in an email to The Daily Signal. “However, it’s equally important to ensure that our state’s entitlement programs, like FoodShare, aren’t abused in a way that wastes taxpayer dollars.”

The last bill (Assembly Bill 212) will take away benefits for seven years from people who misrepresent themselves when applying for unemployment insurance benefits.

“Assembly Bill 200 [to limit the amount of FoodShare replacement cards] builds upon a process that has proven to reduce the amount of abuse in the state’s FoodShare program, specifically in instances of benefit card trafficking,” says Heaton, one of the representatives who introduced the legislation.

Fraud investigators will tell you that multiple requests for FoodShare replacement cards in a short period of time is a telltale sign of potential FoodShare benefit trafficking. The bill provides a process that the Department of Health Services [DHS] can use to detect and deter misuse and fraud as well as to educate those who may not understand how to properly use their cards to access benefits. This bill helps provide DHS with another tool to combat waste, fraud, and abuse in the FoodShare program, while also making sure that the safety net for those in need remains intact.

A 2014 audit on public benefits in Wisconsin found that 67,000 fraudulent payments were made to over 44,000 “unique” Social Security numbers. Over 14,000 had more than two instances of fraud in a three-year time frame, the MacIver Institute, a public policy think tank in Wisconsin, reports.

This is a “substantial problem” and must be addressed, according to Brett Healy, president of the MacIver Institute.

“These programs provide a valuable service to people in need, and we need to do everything we can to stop the fraud so that the people in need can receive the benefits that will help them out,” Healy tells The Daily Signal.

Healy notes some disappointment he has in amendments made, due to concerns that the Obama administration would not grant certain waivers, during committee (such as not requiring a clerk to check the FoodShare photo ID).

“It appears the Obama administration will do everything in its power to prevent any taxpayer-friendly changes to public benefit programs—changes that are common sense and should be something everyone can agree on,” Healy said.

Those who oppose the proposed legislation claim that the bills will make it difficult for those in need to get food and could be costly for the state to implement.

Earlier this year, Wisconsin passed a statewide measure to include work requirements for certain adults on the FoodShare program.

“Wisconsin took a good step earlier this year in requiring work for able-bodied adults without children,” said Rachel Sheffield, a policy analyst at The Heritage Foundation. “A work requirement is central to promoting self-sufficiency, which should be the goal of welfare programs like food stamps.”

“At the federal level food stamps should require able-bodied adults to work, prepare for work, or look for work in exchange for receiving assistance,” Sheffield continued.

Before the new legislation reaches Gov. Scott Walker’s desk, the bills must pass in both the General Assembly and the Senate.