Newly Elected Speaker Paul Ryan Has a New Motto for the House: ‘Opportunity for All’ 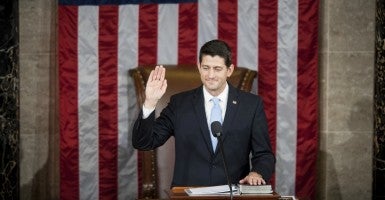 Rep. Paul Ryan is sworn in as the new speaker of the House on Thursday. (Photo: Pete Marovich/UPI/Newscom)

Rep. Paul D. Ryan is the new speaker of the House and he’s already signaling that things will be different under his leadership.

“No more favors for the few,” said Ryan, R-Wis., in an address before the full House on Thursday morning. “Opportunity for all. That is our motto.”

Ryan, after easily being elected the 54th speaker of the House, called for an end to the current stagnant state of Congress and introduced his new vision; one that includes open debate, bipartisan cooperation, and a return to regular order.

In response to continued calls for reforming how the House operates, Ryan championed “opening up the process,” empowering rank-and-file members to immediately contribute and individual committees to begin drafting “all major legislation.”

“Instead of trying to stop the majority, they might try to become the majority,” Ryan said. “In other words we need to return to regular order.”

While Ryan had kind words for outgoing Speaker John Boehner, R-Ohio, he took aim at the status quo and made clear he intends to change it.

“Let’s be frank: the House is broken,” Ryan said. “We’re not solving problems. We’re adding to them. And I am not interested in laying blame. We are not settling scores. We are wiping the slate clean.”

Ryan received 236 votes, including a supermajority of the House Freedom Caucus, a group of 39 conservatives that pushed out Boehner.

The Wisconsin native first served in Washington D.C. as a congressional staffer before becoming a House representative at age 28.

He had served as Ways and Means Committee chairman since January, and previously chaired the Budget Committee for four years. Ryan was the Republican nominee for vice president, running alongside Mitt Romney in 2012.

Ryan, 45, the youngest speaker since 1869, faces high expectations from his Republican colleagues, many who feel the GOP has not taken advantage of its takeover of the House and Senate.

In a press release, Michael Needham, the CEO of Heritage Action, said:

“Speaker Ryan has an opportunity to unite Republicans by embracing a bold, conservative policy agenda.”

“This moment did not occur by chance,” Needham said. “Conservatives have delivered Republicans historic majorities in both the House and the Senate, and they have a right to expect results.”

“Democrats remain committed to protecting the social safety net that keeps millions of Americans on their feet,” Reid said. “We will continue to stand strong against all Republican attacks on middle class Americans.”

This report has been updated to include new reporting.