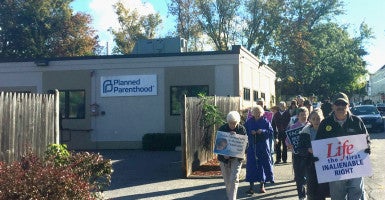 Few states have defunded Planned Parenthood in the wake of a series of damaging undercover videos, even though Republicans—who tend to be pro-life—control the governorship and legislature in more than 20 states.

Since the release over the summer of the videos, in which Planned Parenthood executives are seen and heard discussing the sale of body parts from babies aborted in their clinics, six states have stripped the organization of taxpayers’ money.

That small number means the pro-life movement “has not done its job” in pressing state governments to act, Kristan Hawkins, president of Students for Life of America, told The Daily Signal.

Republicans hold the governor’s office in 31 states and, in 23 of them, enjoy majorities in both houses of the state legislature, according to a tally by the National Conference of State Legislatures. So why haven’t more states moved to deny taxpayers’ money to Planned Parenthood after the release of undercover videos by a pro-life group, the Center for Medical Progress?

Governors and other officials generally say their state has “defunded” Planned Parenthood by taking one or more of these steps:

Casey Mattox, senior counsel at Alliance Defending Freedom, told The Daily Signal that he expects “several other states will take action” to cut or bar taxpayer funding of Planned Parenthood.

“I don’t believe Planned Parenthood is out of the woods with the states,” Mattox said in an interview.

Mattox cautioned that state leaders who wish to act are “up against the Obama administration,” even though he believes the administration’s argument “fails on the law.”

“They know whatever they do will be challenged,” Harned said in an interview with The Daily Signal. “There are a lot of discussions going on right now about the best way to approach [defunding Planned Parenthood].”

The picture will become clearer after many state legislatures convene their sessions, she said.

The pro-life movement, Hawkins told The Daily Signal, “has not done its job in forcing the hand of these governments to defund Planned Parenthood on the state level.” The Students for Life of America president added:

At the very least, every one of these states should be investigating the abortion giant thoroughly and not just giving lip service to pro-lifers.

Planned Parenthood did not return The Daily Signal’s request for comment.

The 10 undercover videos released since July by the Center for Medical Progress raise questions about whether Planned Parenthood, the nation’s largest abortion provider, sells the body parts of aborted babies to researchers for profit. Trafficking in human body parts—including those from abortions—is a violation of federal law.

Planned Parenthood denied illegal conduct and dismissed the videos as the “heavily edited” work of an “extremist” pro-life group. In an effort to end the scandal, the organization announced it no longer would accept “reimbursement” for “reasonable expenses related to tissue donation.”

David Daleiden, founder of the Center for Medical Progress, called the policy change a “PR stunt” and “an admission of guilt.”

By that time, the videos had spurred congressional and state investigations into allegations of criminal conduct at Planned Parenthood, with six states acting to defund the organization.

In a July statement regarding what it would mean to “defund” the organization, Dawn Laguens, executive vice president of Planned Parenthood Action Fund, said: “It’s outrageous, not to mention wildly unpopular, that politicians are using this widely discredited attack against Planned Parenthood to push through legislation rolling back women’s access to health care.”

Laguens accused those seeking to end taxpayer funding to Planned Parenthood of engaging in a “zealous quest” to deny health care to women.

“At the end of the day, we know their true political agenda is to take away women’s access to health care,” she said.

Acting on What the Videos Show

In New Hampshire, the state’s Executive Council rejected state funding for Planned Parenthood in a party-line vote over the objections of Gov. Maggie Hassan, a Democrat, after she refused to authorize an investigation. New Hampshire, however, did authorize contracts with other clinics that perform abortions.

Utah Gov. Gary Herbert ordered that his state stop acting as an “intermediary” for “pass-through federal funds” for Planned Parenthood.

A spokesman for Abbott said the Republican governor also proposed the LIFE Initiative, a combination of legislation and executive action. Abbott’s plan includes making it a felony under state law to perform a partial-birth abortion, as well as criminalizing the altering of an abortion procedure to ensure body parts remain intact. He also would expand adoption services.

North Carolina approved legislation barring the state from “renewing or extending existing contracts” with abortion providers, although the measure did not specify Planned Parenthood.

The Daily Signal called or emailed the offices of the 18 Republican governors in states with Republican-controlled legislatures that have not defunded Planned Parenthood, to ask whether they had plans to do so.  (Also contacted was the office of Nebraska Gov. Pete Ricketts, a Republican, although that state’s unicameral legislature technically is nonpartisan.)

These governors responded to The Daily Signal’s request for comment:

Gov. Scott Walker’s press secretary, Laurel Patrick,  said the state defunded Planned Parenthood in the 2011-2013 budget, long before the videos from the Center for Medical Progress began to be released.

Walker found the videos “disturbing and abhorrent,” and intends to work with the state legislature to “pass legislation to ban these practices in Wisconsin and address concerns about this organization,” Patrick said, adding:

Wisconsin barred Planned Parenthood from receiving state family planning funds, but the organization continues to  participates in the Medicaid program.

A spokeswoman for Gov. Sam Brownback said Kansas defunded Planned Parenthood in 2011, but after the videos surfaced he called for inspections of the group’s clinics and other abortion facilities.

In Kansas,  applicants for the state’s share of federal Title X funds must compete for the money. Planned Parenthood is ineligible to compete because it doesn’t provide comprehensive care, the governor’s spokeswoman said.

Unfortunately, the Obama administration has started going around Ohio and funding Planned Parenthood directly. They have also threatened all states with cutting off federal Medicaid funds if they kick Planned Parenthood out of states’ Medicaid systems for non-abortion services. Funding for elective abortions is already prohibited. That’s why it’s so important for Congress and the General Assembly to continue looking for the best strategies to get taxpayers’ money away from Planned Parenthood.

Gov. Rick Scott’s office gave The Daily Signal this statement from the governor:

The videos about Planned Parenthood are awful. As someone who is pro-life and a father and a grandfather, I believe we must not tolerate any gross disregard for human life. We took aggressive, immediate action to investigate Planned Parenthood offices in Florida when the horrific videos were released. When we found that some of their facilities were not complying with state law, we held them accountable.

Although Planned Parenthood does not perform abortions in Oklahoma, Gov. Mary Fallin’s office provided this statement from her:

I believe in the sanctity of innocent life and I have spent the last 25 years in office supporting and pushing measures to protect the unborn. I have signed every pro-life measure that has come to my desk, and I will continue to work with the legislature on policies that protect innocent life.

The recent videos showing a Planned Parenthood employee callously referring to ‘crushing’ an unborn baby and selling its organs to the highest bidder are sickening. To ensure they are complying with Oklahoma laws, I have asked the Oklahoma Health Care Authority to investigate Planned Parenthood’s operations and ensure that no state funds are being misused.

A spokeswoman for Gov. Mike Pence said Indiana “does not contract with abortion providers, including Planned Parenthood.”

Indiana barred Planned Parenthood and other abortion providers from receiving state grants. A federal court, however, prevented Indiana from excluding the organization from its Medicaid program.

Defunding Planned Parenthood in Georgia is “something the legislature would have to take up during session,” a spokeswoman for Gov. Nathan Deal said.

In the wake of  the videos, Deal ordered the state Department of Public Health to conduct a joint review of Planned Parenthood clinics.