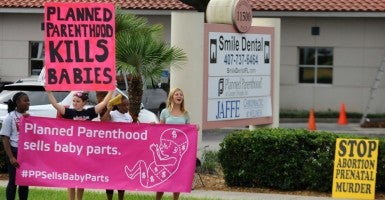 Protesters from the anti-abortion group Operation Save America demonstrate in front of a Planned Parenthood clinic in Orlando, Florida with calls to defund the reproductive heath care provider. The protest follows recent allegations that Planned Parenthood is illegally harvesting and selling tissue from aborted fetuses, a claim the group denies. On September 29, 2015, House Republicans held the first of several hearings to investigate the organization's practices. (Photo: Newscom/Paul Hennessy/Polaris)

Planned Parenthood Federation of America announced today it would no longer accept reimbursements for tissue donated to researchers from aborted babies.

The policy change comes in wake of ongoing attacks against the organization that were triggered by a string of undercover videos produced by the Center for Medical Progress. Those videos have raised questions about whether Planned Parenthood is selling aborted fetal body parts to researchers for profit.

“For three months, Planned Parenthood has tried to pass off its baby-parts-for-money scheme as totally legitimate,” Daleiden said in a statement. “Today, Planned Parenthood’s latest PR stunt of so-called ‘policy’ change is an admission of guilt.”

In an Oct. 13 letter addressed to the National Institutes of Health, Planned Parenthood’s president, Cecile Richards, called allegations against the group “categorically false” and said the reason behind the policy change relating their tissue donation practice is to “take away any basis for attacking Planned Parenthood to advance an anti-abortion political agenda.”

In the letter, Richards said:

In order to completely debunk the disingenuous argument that our opponents have been using—and to reveal the true political purpose of these attacks—our Federation has decided, going forward, that any Planned Parenthood health center that is involved in donating tissue after an abortion for medical research will follow the model already in place at one of our two affiliates currently facilitating donations for fetal tissue research. That affiliate accepts no reimbursement for its reasonable expenses.

If the money Planned Parenthood has been receiving for baby body parts were truly legitimate ‘reimbursement,’ why cancel it? This proves what [the Center for Medical Progress] has been saying all along—Planned Parenthood incurs no actual costs, and the payments for harvested fetal parts have always been an extra profit margin.

While it is illegal to profit off the sale of aborted body parts, organizations can accept “reasonable” reimbursements for such donations, according to The Heritage Foundation’s Hans von Spakovsky. Currently, three congressional committees are investigating Planned Parenthood and its tissue donation practices.

The chairman for one of those committees, Rep. Jason Chaffetz, R-Utah, credited the House’s investigative work for pressuring Planned Parenthood to make this change.

“This is a good, tangible result of the collective efforts of the House in investigating Planned Parenthood,” said Chaffetz, chairman of the Oversight and Government Reform Committee. “It is helpful in taking away some questions surrounding their transactions involving fetal tissue.”

Chaffetz said his committee will continue its probe into the group and whether or not it should receive taxpayer subsidies. Aides for the two additional committees investigating Planned Parenthood, the Judiciary Committee and the Energy and Commerce Committee, also confirmed that their investigations will continue.

In the letter, Richards stressed her decision to change the policy surrounding tissue donation does not admit any wrongdoing, and that other abortion providers should not feel pressured to follow suit.

“[O]ur decision not to take any reimbursement for expenses should not be interpreted as a suggestion that anyone else should not take reimbursement or that the law in this area isn’t strong,” she said. “Our decision is first and foremost about preserving the ability of our patients to donate tissue, and to expose our opponents’ false charges about this limited but important work.”