‘Building Up Skills’: How St. Coletta’s Shops Fill a Gap for Adults With Disabilities 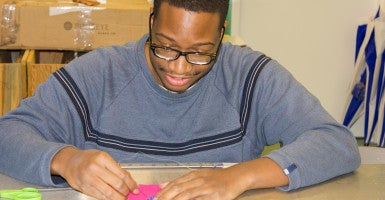 'What we gotta do': Devonte Barksdale makes another necklace with his girlfriend in mind. (Photo: Christine Eckstein/St. Coletta's of Greater Washington)

It’s a warm Friday in September, and Devonte Barksdale is spending it inside, beading necklaces.

Barksdale, 23, is referring to his work as a craftsman for St. Coletta’s Shops, the adult employment program run by St. Coletta’s of Greater Washington, a nonprofit advocate and educator for those with disabilities.

Barksdale is one of roughly 450 adults with intellectual and secondary disabilities throughout the Washington metropolitan area employed by St. Coletta’s to make jewelry, scarves, and bags. Some even make glass dishes.

The organization sells the goods at three brick-and-mortar locations, online, and from a mobile “Fashion Truck” in Maryland; Virginia; and Washington, D.C.

“We get our pay stubs every other Friday, we do,” Barksdale adds, shifting his weight. “So I should get it today.”

For Barksdale, a graduate of St. Coletta’s Special Education Public Charter School in Southeast Washington, his pay stub is more than simply a source of pride. It’s a way to buy his girlfriend a pair of earrings he’s had his eye on.

“That would make her happy,” he says softly.

It’s a simple reflection that hints at the core of St. Coletta’s work. More than anything, the group’s mission is one of dignity, offering employees a sense of purpose that can be lost without gainful employment. ‘We can’t afford to waste talent’: Besides beading, employees weave and make glassware such as bowls and plates. (Photo: Christine Eckstein/St. Coletta’s)

“The fact is, these people, once they become 22, their funding gets cut in half,” says Rebecca Hill, chief development officer for St. Coletta’s of Greater Washington, who has worked for the nonprofit since 2004. “And you have to be a really patient employer to take on one of our folks, usually. There are some of those people out there, but there are not enough of them.”

‘Businesses Are Not Charities’

Barksdale is one of St. Coletta’s higher-functioning employees, Hill says. Roughly half of the shop’s employees are non-verbal, she says.

Many likely will “never be able to work in a full-time environment,” by her estimation, because of behavioral issues or other specific needs.

“Businesses are not charities,” says Hill, herself the mother of a son with Asperger syndrome.

The lack of employment opportunities for its own high school graduates prompted the nonprofit, founded in 1959 as an educational institution by the mother of a special needs child, to formally launch St. Coletta’s Shops in 2009.

It was a feat for an organization that was in disarray in 1993 and nearly closed before being turned around by a new principal, Sharon Brady Raimo, a former public school teacher and administrator.

“States have a waiver program with a certain number of slots, and they get filled up,” says Clyde Terry, chairman of the National Council on Disability. Terry notes that the program is funded by Medicaid money and, given how many individuals with disabilities remain underserved, argues that “we perhaps haven’t found the best way to allocate some of those dollars.” They sit at home rather than getting plugged into the system, and so some of the public dollars that we spend in education, those skills start getting lost. As a nation, we can’t afford to waste the talent, the skills, of anyone.

Hill acknowledges that other programs in the D.C. area employ disabled workers—among them ServiceSource, a national nonprofit providing resources for the disabled. But, she says, a limited number of spaces and a growing population of disabled adults have created an increasingly competitive marketplace.

The creative outlet, she argues, along with the repetitive nature of some of the work, such as weaving, is especially fit for certain disabled populations.

From Collaboration to Business Model

So, in 2008, what initially began as a collaboration with a weaving group operating out of Arlington, Va., slowly expanded into a full-blown social enterprise.

In August 2010, St. Coletta’s brought in an artistic coordinator. Christine Eckstein, a photographer with an art degree from Syracuse University, spends her days in the studio with employees. She teaches them techniques such as how to stain glass with powder paint.

“We have a pretty diverse program,” Eckstein says. “I can set up demonstrations on how to do things with just pictures and allow someone who maybe wouldn’t be able to work in any other space to work really successfully here.”

Employees also get the opportunity to interact with buyers at St. Coletta’s storefronts and on the retail truck. It’s a tailored, community-based approach to learning fine motor and social skills with the bonus of a paycheck, Eckstein says:

We’re working on building up skills so that by the time [those able to succeed in another setting] are ready to go and apply for a job, they can really do it. They can really count money without needing assistance and could really follow a list of steps that someone were to give to them.

Although the group’s goal never has been financial, it take its art—and potential for expansion—seriously. Eckstein consults a volunteer who used to work for European fabric producer Scalamandré to review interior design and fashion trends. Hoping to ‘take off’: Scarves woven and dyed by adults with disabilities. (Photo: St. Coletta’s/Facebook)

“Right now, we’re kind of breaking even,” Hill says. “Hopefully, eventually we may be able to have another production site where we could hire non-disabled people to work alongside [our employees]. If we really took off, we could have a truly integrated work space.”

Terry, the federal official, says it is most beneficial for the disabled to work in integrated environments such as the one Hill imagines funding one day. He says:

Forty years ago, we wouldn’t have thought it possible to have folks who are blind that are lawyers and accountants, to have folks that are in wheelchairs that are doctors. So [those who] suggest that simply because someone may have a development or intellectual disability, that they’ll never work, those individuals lack the foresight to see what the future could be. … Folks do well in what’s called supportive employment.

Someone in the workplace, paid either by the employer or a nonprofit, can teach a job to disabled workers, Terry explains. The teacher can phase out slowly as trainees do the job alongside non-disabled coworkers.

Disability funding is a tricky issue, hotly debated by politicians as a 2016 funding crisis looms. But the need is clear, advocates say.

“People are often talking about how Social Security funding is fine until 2033,” Greszler says, “but the disability component of that is only going to have enough money to keep paying benefits until next year.”

As a result, Congress is looking into various strategies for reforming the program to reallocate funds. President Obama has suggested combining the Social Security and Disability funds into one program, although critics argue they were set up separately for a reason.

Many employees of St. Coletta’s Shops didn’t have an earlier work history, nor do they receive disability insurance. Most receive Supplemental Security Income (SSI), which, Greszler says, is “probably barely going to keep them out of poverty.”

SSI rules require that recipients collect only up to $2,000 in earnings before risking their benefits, meaning St. Coletta’s must carefully track employees’ hours.

For many families, the transition from a disabled member’s childhood to his or her adulthood is jarring and can wreak havoc financially.

“When you’re a child, there’s the Individuals with Disabilities Education Act [IDEA], which requires the federal government educate special education children until they are 22, or 21 in some states,” Hill says.

But there is no federal mandate for services for adults, so that varies vastly from state to state. And it’s Medicaid money usually, so you’re sharing it with people who have mental health problems, people who are poor, so it’s a very small pool of money.

Terry echoes the challenge faced by programs such as St. Coletta under the government-created structure.

“[W]e’ve invested in IDEA and our public school system. We’ve made the public policy judgment that [children with disabilities] can be educated,” Terry says, “… so now when they turn 22, unfortunately, the adult system is not prepared to accept them.”

For now, St. Coletta’s focuses on its employees—and customers.