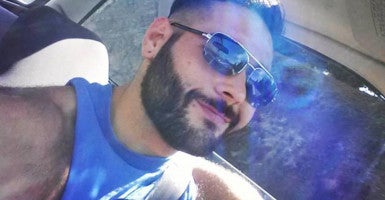 Chris Mintz in a picture from his Facebook page. (Photo: Chris Mintz/Facebook)

North Carolina native Chris Mintz has emerged as a hero after yesterday’s tragic shooting at Umpqua Community College in Oregon.

Mintz, who spent ten years with the U.S. Army including an overseas deployment, reportedly ran toward the gunfire to help other students get to safety.

Mintz, 30, then allegedly stood up to shooter Chris Harper Mercer as he made his way through a building on Umpqua’s Roseburg, Ore., campus.

“He ran to the library and pulled the alarms and he was telling people to run, grabbing people, telling them, ‘You just have to go,’” witness Hannah Miles told ABC News.

“He actually ran back towards the building where the shooting was and he ran back into the building, and I don’t know what happened to him,” Miles continued.

Mintz, who had just started taking classes at Oregon’s Umpqua Community College this week, then reportedly tried to physically shield his classmates from the danger. According to The Daily Beast, Mintz charged right at the shooter—in the same classroom where nine victims were killed—after trying to hold him off by blocking the room’s door.

In the process, he took seven bullets to his torso and broke both of his legs.

“We were told he did heroic things to protect some people,” Mintz’s aunt Sheila Brown told NBC News. “We’ve all been sitting on pins and needles and praying very hard [for him].”

After Mercer shot Mintz, who was attending the school to become a fitness trainer, he reportedly told the gunman that it was his son Tyrik’s birthday. According to reports, Mercer then shot him two more times.

“I really think that if he wasn’t such a strong, young guy, he may have died,” another aunt, Wanda Mintz, told QFox13.

In total, Mintz was shot in the back, abdomen, and hands. It is not clear how his legs were broken. Miraculously, none of his vital organs were hit throughout the onslaught of bullets.

“He was on the wrestling team and he’s done cage-fighting, so it does not surprise me that he would act heroically,” Brown said. Pastor Grant Goins and Rosemary Alwan sing along to ‘Amazing Grace’ during a candlelight vigil, held Thursday, October 1, 2015 in Roseburg, Oregon, for the victims of the mass shooting. (Photo: Amiran White/ZUMA Press/Newscom)

After police gained control of the situation, Mintz was taken to a hospital where he underwent surgery.

His family members have given updates on his status.

“From what I’m hearing, he’s fine,” Mintz’s cousin Derek Bourgeouis told The Daily Beast. “But he’s going to have to learn to walk again.”

A GoFundMe page to help with medical expenses was set up by Derek Bourgeois after the attack. He says Mintz will “have to go through a ton of physical therapy.”

“I just hope that everyone else is OK,” Mintz told ABC News in an interview Friday morning.

“I’m just worried about everyone else.”