Here’s the Face of the 20-Week Abortion Ban Debate 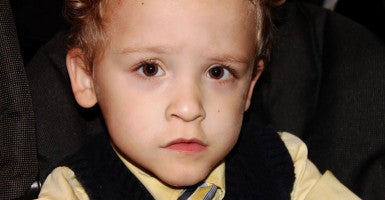 At 29 years old, Danielle Pickering was faced with an impossible decision: Save her own life, or that of her unborn son.

“We chose not to let them induce me to save his life, at the risk of my life,” Danielle told The Daily Signal, referencing her experience with a life-threatening condition that threatened her own life, and that of her unborn child.

He faces minor chronic lung disease, asthma, and has a slight speech delay. Other than that, his parents call him “absolutely normal”—with one exception.

“He loves to vacuum, help me clean, [and] he loves to help me take the clothes out of the dryer,” laughed Danielle. Having beat the odds, the pro-life community is now making Micah the face of the national debate surrounding late-term abortions.

This week, the Pickering family—Danielle and her husband, Clayton—lobbied Senators to vote to advance a bill that would ban most abortions after 20 weeks.

The vote came on the same day the Pope arrived in Washington, D.C., and included exceptions for incest, rape and the life of the mother.

But right after a press conference in Washington D.C. with the Pickerings and supportive lawmakers and pro-life leaders, Democrats used a filibuster to block the vote from occurring.

Under the legislation, Danielle could have still chosen to abort her child.

Supporters of the bill hoped her story would inspire people to realize the possibilities of saying no to abortion. Danielle’s water broke at 21 weeks, just over half of a typical 40-week pregnancy. Sensing something wrong, she went to the doctor. But being so early in the pregnancy, doctors missed what had happened and sent her home.

For the next week, Danielle went about her regular day-to-day life. “I went to yard sales, cooked dinners, all with my water broken,” she said.

A week later, she started having contractions and was brought to the University of Iowa Children’s Hospital, where doctors told her she would stay for the rest of her pregnancy—whether that was three hours or three months.

At the hospital, doctors diagnosed her with amnionitis, a bacterial infection that resulted from her water being broken for so long without any antibiotics. Doctors wanted to induce the pregnancy so they could treat her life-threatening infection, but Danielle and her husband refused.

“The longer they didn’t treat this infection, the more she was in danger,” Clayton said. “But every minute that we didn’t was better for him.”

“It was me or him at that point, and we chose him as long as we could,” Danielle said. When Micah was born, his parents say he “grabbed our fingers and just gripped.” (Photo: Kelsey Harkness/Daily Signal)

A Chance At Survival

A study published in the New England Journal of Medicine found that 23 percent of infants born at 22 weeks survived with medical treatment. One in three of those survivors faced serious impairments, such as blindness, deafness or cerebral palsy.

Doctors warned the Pickering’s that should they fight to keep their son alive, he would likely face one of these problems.

“They said if he would live, he would have serious medical impairments,” Clayton said.

On July 25, 2012, at 22 weeks and four days, Danielle naturally went into labor and gave birth to their first son, who they named Micah. He was one pound and six ounces.

Upon birth, he cried twice—something doctors said would be impossible, given his lungs had only two to three weeks to develop.

When they whisped Micah away, Danielle thought she’d never see him again—alive, at least. The Pickering’s credit their Christian Baptist faith for Micah’s survival, but also say it couldn’t be done without their doctors.

The total cost of keeping Micah alive was more than $1 million. “His medical bill was over 100 pages,” Danielle said. “We had insurance and that covered 100 percent, thankfully.”

Because the medical community is in flux over when babies can survive outside the womb, few hospitals offer treatment for babies at such an early stage in development. The Pickerings say if they had gone to Jefferson County Hospital, just over an hour away from the University of Iowa Children’s Hospital, Micah wouldn’t have survived.

“A lot of hospitals, even if they wanted to, couldn’t save Micah,” Clayton said.

Having successfully given birth to Micah, Danielle and Clayton believe they have a duty to do what they can to save other lives that might otherwise be aborted.

“They say it’s not a baby, but I think when you look at Micah’s picture when he was 22 weeks…maybe that will help people see him in a different life they didn’t before,” Danielle said.