James Madison, Self-Government and the Importance of Self-Control 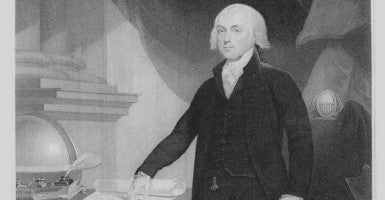 On Sept 17th, 1787 delegates to the Constitutional Convention signed the document in Philadelphia (Photo: Library of Congress)

Colleen Sheehan is professor of political science and director of the Matthew J. Ryan Center at Villanova University. She is a member of the Council of Academic Advisors of the B. Kenneth Simon Center for Principles and Politics at the Heritage Foundation. She is also an advisory council member and senior scholar with the Jack C. Miller Center for Teaching America’s Founding Principles and History.

As we commemorate Constitution Day this Sep. 17th, we might recall the exceptional contributions of the shy, 5’6”, not much more than 100 lb. fellow from Piedmont, Va. who is generally considered the Father of the Constitution.

As modest as James Madison was in appearance and demeanor, he made up for in his aspiration for America. His ambition for his country was to prove to the world that mankind is capable of self-government.

To accomplish this requires citizens to develop the habits of self-government.

Participation in civic affairs is a part of the tools of democratic governance, but an active populace alone is not sufficient to the task at hand.

What is particularly needed, Madison believed, is that citizens possess a sound understanding of their rights and responsibilities.

The challenge for the citizens of a democracy is to moderate his desires and demands – to moderate the use of his liberty – so that he not only exercises his own rights, but demonstrates respect for the rights of others.

In other words, self-government obliges us to practice measured liberty.

When Madison finished his contribution to the Federalist essays he wrote with Alexander Hamilton and John Jay, he knew that his investigation was only partially complete.

At the close of the first House of Representatives in early March 1791 (in which Madison served as de facto leader of the House as well as leader of the newly emerging Republican Party), he immersed himself in the scholarly project he had begun in the pages of The Federalist. In his rented room at Mrs. House’s Boarding House at 5th and Market (then High) Street in Philadelphia, Madison settled into his scholarly harness to complete the “little task” he had set for himself.

Madison’s self-appointed chore was to solve the age-old dilemma that had stumped political philosophers from time immemorial: how to make republican government – government by the people – both good government and lasting government.

Needless to say, there was good reason Aristotle, Cicero, Locke, Sydney, Montesquieu, and others had not yet solved the problems of popular government. Madison’s self-described “little task” was the toughest political challenge of all.

From early March 1791 until he set sail with his friend Thomas Jefferson up the lakes of northern New York in May, Madison burned the midnight oil in his cramped quarters at Mrs. House’s inn.

During that solitary, but productive spring, he read voraciously, took extensive notes, and mentally debated enduring questions with the “great oracles of political wisdom.”

Madison’s aim was to discover what the “great oracles” had ignored or neglected. The outcome of this quest, he believed, might show us how to construct a republic that would provide a path for freedom, answer the hopes of humanity, and vindicate the great experiment in self-government.

Imagine Madison’s excitement as he edged closer and closer to discovering the object of his political philosophical quest. “Such is the government,” he ultimately declared,

“for which philosophy has been searching, and humanity been sighing, from the most remote ages. Such are the republican governments which it is the glory of America to have invented, and her unrivalled happiness to possess.”

What was it that Madison discovered that spring that made the painfully shy fellow so passionately effusive? Can we envision for ourselves the dream of self-government that so inspired Madison?

No one has better captured the gist of Madison’s aspiration for self-government than the poet Robert Frost. What Madison meant by the American dream, Frost said, was “self-control,” – “a new land [filled] with people in self-control.”

Frost worried, however, that the spirit of self-reliance and the strength of self-control are qualities that later generations of Americans might abandon.

Perhaps the progressive desire for more national government control over our health, our children’s education, and our consciences, or the libertarian demand for immeasurable self-determination, are examples of contemporary roads taken that would have concerned Frost.

“Measure always reassures me,” Frost wrote. Measure also reassured James Madison. Self-control – this is the virtue at the core of our civic rights and duties.

It is the virtue that marks the very nature of the American compact. That compact – our Constitution – requires citizens to practice measured liberty. This is the condition of freedom and the tempo of self-government.