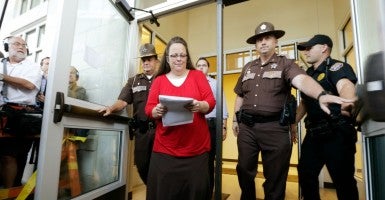 “I just want to serve my neighbors quietly without violating my conscience.” With those words, Kim Davis resumed her post as the clerk of Rowan County Monday. Her statement serves as a good reminder of what this case has been all about—finding a way to allow public servants to discharge their duties to God and neighbor alike, even when those duties might at first appear to conflict.

Contrary to media reports, Davis was not seeking some sort of showdown with the Supreme Court over the ability of same-sex couples to get marriage licenses in her county. All she asked for, from the beginning, was a way to opt herself out of the process so that she would not be forced to violate her sincere religious beliefs about marriage.

In January, in anticipation of a Supreme Court ruling that might force them to issue marriage licenses to same-sex couples, Davis and other clerks had asked the Kentucky legislature for an accommodation for objecting clerks. The request was ignored.

Then, in June, after the Supreme Court imposed a redefinition of marriage on the country, Kentucky Governor Steve Beshear mandated that Davis and other county clerks issue licenses to same-sex couples, saying that any clerk who disagreed should resign.

But Davis does not believe that the law requires her to choose between her faith and her job. Instead, she argues, it requires the government to reasonably accommodate her beliefs.

Stating her commitment to follow her conscience, Davis ordered her office to stop issuing licenses altogether, because they had her name and title on them, and was sued by couples who could not get licenses from her office as a result. Rather than quit, she wrote the governor asking for an immediate legislative accommodation, but the governor announced that Davis would have to wait until the legislature reconvenes in January.

It was under these circumstances that Davis stuck by her decision not to issue licenses despite a court order, which prompted a federal judge to throw her in jail for six days for contempt and order her deputy clerks to issue the licenses in her absence.

But then an interesting thing happened. When the deputy clerks omitted Kim Davis’s name from the marriage licenses, the judge said, in writing, that the modification of the form did not violate his order. After being released from jail last Tuesday and reporting to work this week, Kim Davis asked her deputies not only to omit her name, but also to replace her title on the license forms with a statement saying that the licenses are being issued as required by a federal court order.

Where state officials could not or would not come up with a solution, Kim Davis has defused the tension by proposing a new way forward.

This carries an important lesson. When requests for legislative accommodation seem to fall on deaf ears, creative efforts to find a specific solution on a personal level may provide a way out. This approach has helped resolve conflicts in other contexts. For example, people who cannot work on their religious day of rest will routinely ask co-workers to cover for them. They can thereby continue to exercise their religion while pursuing an official accommodation from the employer.

In the wake of a social change as massive as that foisted on the country by the Supreme Court’s Obergefell decision, ultimately, we need federal and state legislative protections for conscience. In Kentucky, the issue is expected to be in the legislative debate when the state legislature reconvenes in January.

Accommodations can ensure that marriage licenses are issued to everyone legally entitled to them while the consciences of clerks are respected. Because Kentucky already allows vegetarian clerks to opt out of issuing hunting or fishing licenses for moral reasons, surely it should provide at least the same solicitude for religious beliefs about an institution that 75 percent of Kentuckians had voted to affirm as the union of one man and one woman.