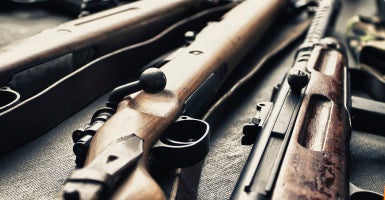 The first annual meeting of the nations that have ratified the 2014 Arms Trade Treaty (ATT) opened on Monday, August 24 at a spa in Cancún, Mexico. The treaty’s been controversial in the U.S. from the moment negotiations on it began, and this meeting will surely stoke the suspicions of those who think the treaty’s real aim is to crimp America’s sovereignty and constitutional liberties.

The meeting was originally supposed to be in Mexico City, but wouldn’t you rather spend your off-hours by the pool?

Of course, you may think it’s weird, or sick, that all these nations pretend to believe that the best place to discuss the arms trade is at a seaside resort. After all, many of them spend all their time pleading poverty and demanding aid from the U.S. to implement the treaty.

But frankly, they don’t care how bad it looks. They’ve got a great boondoggle going, and no one’s going to spoil it for them.

But everyone’s going to Mexico not  just because it’s got great beaches. Mexico has  been one of the leading campaigners for the ATT. It wants to use the treaty to promote gun control in the U.S.

Mexico’s theory is that, since any gun in the U.S. might at some point conceivably cross the U.S. border, all U.S. guns have to be controlled in the name of controlling the international arms trade. That’s not going to happen at this meeting (or ever, if the U.S. retains its sanity).

But Mexico, the other nations that agree with it, and “progressive” groups that campaigned for the treaty—the blame-America-first activists, in other words—are in this game for the long haul. So it’s not a good sign that Mexico’s been given the job of hosting the first treaty meeting.

It’s even less good that Mexico’s spent much of the past year colluding with the activists to keep skeptics (like myself) out of the room. Their view was that only true believers who campaigned for the treaty should be allowed to see what’s going on.

You might wonder what they’re afraid of. We skeptics make no secret of our views, but we’re a well-mannered bunch: no spitballs. However, if we were always in the room, we’d report on exactly how closely the activists are working with Mexico and other likeminded nations.

The activists—led by the global Control Arms Coalition, which has a massive presence at Cancún—are the only insiders in the treaty process, and they want to keep it that way.

The ATT was adopted through the U.N., which means it was drafted by the world’s nations. That’s bad, because there are lots of incapable and evil governments in the world. But it’s better than the alternative, which was for the ATT to have been drafted solely by the activists.

Now that the treaty exists, however, the activists want to take it over and direct it for their own purposes. What they want is to turn the ATT into an arms control and disarmament treaty.

Keeping skeptics away is part of that campaign.

So far, they’ve not succeeded in keeping us out, or in taking over the treaty. But the ATT isn’t simply a treaty that’s over and done with. Like many treaties, it’s a process that will go on and on, in meeting after meeting, year after year. And the activists have lots of people, lots of money, and lots of time.

The U.S.’s goal in Cancún should be to do whatever it can to prevent the activists from getting any footholds. That means ensuring  a treaty secretariat that’s strictly limited in its purposes, conference rules that don’t privilege the activists, and reporting requirements that don’t go beyond current U.S. practice or identify individual U.S. firearms owners.

Because, thankfully, the U.S. hasn’t ratified the ATT, we won’t have a vote in much of what goes on. But that doesn’t mean we lack influence. Let’s hope we use it wisely.