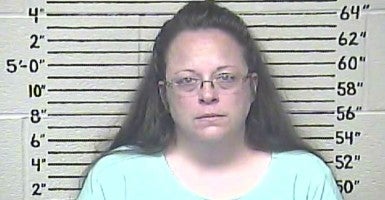 Rowan County, Ky., is a lesson for America in how not to resolve social conflict. The local head clerk is sitting in jail, and a judge has ordered her deputy clerks to issue marriage licenses to same-sex couples in her absence.

When the Supreme Court redefined marriage for the nation in an activist decision this June, it took the issue out of the democratic process and made it much harder for citizens to navigate our differences on this fundamental institution. Both sides of the debate knew the decision would have significant social effects. For civil servants like clerks who issue marriage licenses, the implications were also immediately personal.

Rowan County clerk Kim Davis could not, as a matter of religious conviction, issue same-sex marriage licenses. Davis’ further dilemma is the fact that her name is attached to every county marriage license, and she believes issuing them to same-sex couples would constitute precisely the kind of endorsement of same-sex unions her faith forbids. Because of that, her office stopped issuing all marriage licenses after the Supreme Court decision.

A lawsuit followed and a federal court on August 12 ordered her to issue licenses despite her faith-based objections. She did not comply with the order, and at a hearing Thursday the judge sent Davis to jail for contempt of court, even though the plaintiffs had specifically asked she be given fines instead of jail time. The judge ordered the deputy clerks to issue marriage licenses or also face contempt of court and five out of six said they would comply. Meanwhile, the judge has told Davis she will stay in jail because she will not comply with his orders.

This situation could have been avoided. This problem would not have even existed in Kentucky and many other parts of the country had the Supreme Court allowed states to deal with the marriage question democratically—with the give-and-take that naturally leads to compromises, the balancing of competing interests, and a diversity of solutions over time. Instead the Supreme Court redefined the institution for the entire country in one fell swoop but did not say how our constitutional guarantee of religious liberty would be reconciled with the new order of things.

Conflicts have been warned about for years, and all four dissenters to the Supreme Court’s marriage decision predicted dire consequences for religious freedom.

Given the inevitable challenges to this fundamental freedom, it is imperative that we seek solutions to navigate the complex road ahead. In this particular case, there are a number of potential ways forward so that same-sex couples can get licenses as required by the courts and Kim Davis can be released from jail without having to agree to resign or violate her conscience.

One help in finding the way forward is Kentucky’s Religious Freedom Restoration Act, which requires the government to avoid substantially burdening religious expression absent a compelling government interest. There is no compelling government interest in keeping Kim Davis’s name on the licenses instead of the name of the deputy clerks who are willing to issue them. If it’s “just a little form”—as Davis’ critics would like to suggest—then change the form, not the beliefs.

There are a number of other possible accommodations that could be adopted by the legislature, courts, or executive agencies in the state. Davis is not interested in stopping all same-sex marriages in her county. She is only asking that she not be forced to participate in them in a way that violates her beliefs.

Opt-out systems like this work in many walks of life. In fact, we already have examples of such options being adopted in the marriage licensing context. For example, North Carolina allows objecting clerks to choose to not get involved with marriage licensing at all, and the state will guarantee that someone will take their place if needed. Hawaii has an online registration system for marriage licensing that gets rid of many of these concerns.

Whatever the method, people of good will want a solution that leads to better outcomes than the impasse in Rowan County this week. Reaching such a solution in Kentucky is still feasible—and desirable, to respect the legally protected interests of the plaintiffs and the religious conscience of Kim Davis.