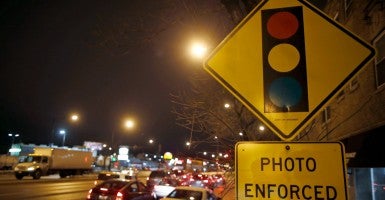 Red-light cameras across Missouri were ordered to a stop this week after the state Supreme Court nullified multiple local laws authorizing the programs.

The Missouri Supreme Court declared, in one of multiple rulings Tuesday, red-light camera ordinances in Kansas City and St. Peters were invalid because they treated violations as parking tickets and did not deduct driving points as state law requires.

The high court also struck down St. Louis’ program, declaring it unconstitutional because it shifted the burden onto the defendant to prove he or she was not driving at the time of the violation.

The two women who originally sued the city said they were fined with red-light violations even though someone else had been driving when the camera photographed their vehicles.

The court invalidated the city’s program because the photographs could not show who was behind the wheel.

The court’s rulings clarified a series of legal cases in the state more than a year after Kansas City halted its program because of legal confusion.

But the court did not touch on the legality of the cameras themselves, “leaving open the possibility that municipalities can enact red-light camera ordinances that will withstand future legal challenges,” the St. Louis Post-Dispatch reported.

A spokesman for American Traffic Solutions, a lead camera contractor in the United States, told the Post-Dispatch the ruling “upheld the validity of using photo and video evidence in speeding and red-light running violations.”

“We look forward to working with communities throughout Missouri to restart their safety programs in full compliance with the direction provided in the multiple opinions issued today,” spokesman Charley Territo said.

The Missouri rulings highlight a series of legal complications across the U.S. regarding the use of red-light cameras.

The number of local and state governments using red-light cameras has fallen since 2012, according to a Wall Street Journal report. Officials cite studies that have found the cameras have a minor impact in reducing accidents, “and in some cases may increase them,” the report noted.

Currently, 21 states and Washington, D.C., have laws permitting the cameras while another 10 states prohibit their use altogether, according to the Governors Highway Safety Association.