Can You Oppose Gay Marriage and Be a Good Judge? The Chilling Opinion of Ohio Court’s Board 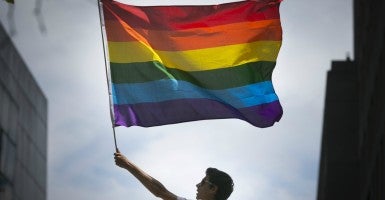 Will those who oppose gay marriage be allowed to live in accordance with their beliefs? (Photo: Elijah Nouvelage/Reuters/Newscom)

Are people who publicly affirm that marriage is the union of one man and one woman unfit to be judges?

The Ohio Supreme Court’s Board of Professional Conduct came close to saying just that in a recent advisory opinion in the wake of the Supreme Court’s national redefinition of marriage.

According to the Board, a judge who performs civil marriage ceremonies cannot decline to perform them for same-sex couples no matter what the judge’s religious beliefs or moral convictions on the matter.

Had the Board stopped there, the Ohio courts could have come up with a system, like in North Carolina, that ensures that every qualified couple receives a timely license and solemnization ceremony while also protecting the conscience rights of objecting clerks and magistrates by allowing them to recuse themselves from all marriage licensing.

There would be no losers under such a system.

But instead, the Board slandered judges who seek to opt out of marriage ceremonies by saying they would create the appearance of “bias or prejudice” against gays or lesbians and should be disqualified from hearing any cases touching upon sexual orientation. But it simply does not follow that a refusal to accept marriage as a genderless institution indicates a bias or prejudice against gays and lesbians.

It has come to this: citing the Bible is now viewed as evidence of bigotry.

Nevertheless, the Board warned that a judge who “publicly states or implies a personal objection to performing same-sex marriages” and seeks recusal from performing all marriages violates the state mandate against judicial “impropriety.” In other words, the commonsense compromise adopted by North Carolina is unethical.

But what if a judge publicly states or merely “implies” (to use the Board’s chilling construction) that marriage is a union of husband and wife when not acting in an official capacity?

Actions taken by other states are discouraging. For example, California has ruled that judges can no longer affiliate with the Boy Scouts of America, even on their own time, because of the Scouts’ requirement that adult troop leaders not openly oppose its beliefs on sexual morality.

Similarly, Atlanta’s fire chief was fired for expressing a biblical understanding of sexual morality in a book written in his personal capacity. The Board itself even took a swipe at religion when it gratuitously warned that quoting the Bible in a judicial proceeding could represent “a manifestation of bias and prejudice.”

It has come to this: citing the Bible is now viewed as evidence of bigotry. So what would stop the Board from dropping all pretenses and asking sitting or potential judges: “Are you now or have you ever been a member of a church that publicly opposes same-sex marriage?” According to the Board’s logic, nothing.

But thankfully we still have a First Amendment. And we still have state legislatures that can provide protections for religious liberty while still providing marriage licenses to all who qualify, as North Carolina did.

That religious freedom is a fundamental right does not mean that the interests of believers always win. States now have a judicially imposed obligation to issue same-sex marriage licenses, and judges and clerks that cannot in good conscience participate in same-sex wedding ceremonies have a responsibility to their employer to make their objections known and seek guidance before it becomes an issue. That the case precipitating the Board’s action involved a same-sex couple actually being denied marriage solemnization perhaps explains, but does not justify, the Board’s extreme response.

As Professor Robin F. Wilson of the University of Illinois Law School notes in her scholarship, citizens entitled to state services “do not necessarily have a claim to receive the service from a particular public servant.” Accordingly, the Board should have stepped back and allowed recusal from all marriage solemnizations as a religious accommodation that everyone can live with. Instead, it effectively cast doubt on the fitness of people of faith to be judges in a sweeping opinion.

The Board’s action fits a growing pattern of myopic exclusion of people of faith from positions of public trust that creates bad precedent and bad blood and makes for bad policy. We can do better.