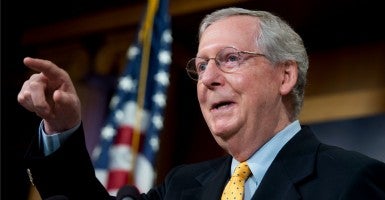 Senate Majority Leader Mitch McConnell said the debate over federal funding for Planned Parenthood would not lead to a government shutdown in the fall. (Photo: Tom Williams/CQ Roll Call/Newscom)

The fate of a spending bill required to keep the government running remains uncertain as Republicans enter the August recess divided over tactics to strip federal funding from Planned Parenthood.

A handful of conservative lawmakers have threatened to reject the measure needed to keep the government open unless Planned Parenthood funding is removed, splintering from Senate Majority Leader Mitch McConnell, who vowed Thursday to avert a government shutdown despite debate over funding.

“We’re not doing government shutdowns and we’re not threatening to default on the national debt,” McConnell, R-Ky., said during a press conference.

“A government shutdown is not what Sen. Lankford is advocating for, but he plans on exploring all possible options to redirect Planned Parenthood taxpayer funding,” a spokesman for Lankford told The Daily Signal.

Republican Sen. Ted Cruz of Texas, meanwhile, has not backed away from a shutdown, promising to use “every procedural means” available to block the more than $500 million in federal grants allocated to the group annually.

“Of course federal taxpayer funds should not go to funding an ongoing criminal enterprise that is committing a pattern of felonies selling the body parts of unborn children,” Cruz told reporters Friday.

Sen. Mike Lee, R-Utah, also plans to reject the spending bill, but he told The New York Times that while he is against Planned Parenthood, he would have rejected the measure regardless.

“Continuing resolutions are problematic for a number of reasons,” he said.

Republican leaders, including McConnell, have pushed to defund Planned Parenthood following the release of five covert videos alleging to show top officials from the organization discussing the sale of fetal tissue for medical research.

The Senate voted last week on legislation introduced by Lankford along with Sens. Joni Ernst, R-Iowa, and Rand Paul, R-Ky., that would have defunded the group, but the bill fell short of the 60 votes needed to advance, splitting along party lines in the final 53-46 roll call.

The approach to block funds to Planned Parenthood is reminiscent of the battle leading up to the 2013 government shutdown after Republicans rejected a spending bill including funding for Obamacare.

“We’ve been down this path before,” McConnell said. “This is a tactic that’s been tried going back to the ’90s, frequently by Republican majorities that always have the same ending: that the focus is on the fact that the government is shut down, not on what the underlying issue that is being protested is.”

McConnell said lawmakers would negotiate a budget deal before the government’s funds expire.

“Each side will have to give some things they don’t want to give and we’ll get to an agreement,” he said.

He vowed that the Senate would continue to investigate Planned Parenthood and find other routes to “make our voices heard.”