How Unusual Is Francisco Sanchez Case? The Facts About Illegal Immigrants and Crimes 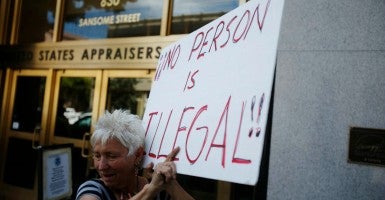 Juan Francisco Lopez-Sanchez, who was arrested an hour after the attack, admitted he shot 32-year-old Kathryn Steinle, but claimed the incident was an “accident.”

Lopez-Sanchez, also known simply as Francisco Sanchez, said he discovered the gun wrapped inside a shirt on the pier. After picking up the gun, he claims it “started to fire on its own.”

“All I want to say is that in the courts, I want them to give me the punishment I deserve and get it over with as soon as possible,” Sanchez said in an interview with KGO-TV on Sunday.

>>> Related:  GOP Pushes Obama to Get Tough on Sanctuary Cities

He isn’t the only illegal immigrant, however, to be convicted and still living in the United States.

According to a recent study released from the Center for Immigration Studies, the U.S. Immigration and Customs Enforcement (ICE) released 30,558 criminally-convicted illegal immigrants, with a total of 79,059 convictions altogether, in 2014.

Furthermore, the CIS report shows that among the 904,000 illegal immigrants who have ignored orders to leave the U.S., approximately 167,527 of these are convicted criminal immigrants.

The concern is that these convicted criminal immigrants will commit crimes upon being released, as in Sanchez’s case.

“The long-term ramifications are continued crime inflicted upon U.S. citizens,” Marguerite Telford, director of communications at CIS, said in an interview with The Daily Signal in June. “So the [Obama] administration’s catch and release policy means these criminal aliens are free to commit additional crimes.”

Furthermore, San Francisco does not have strict immigration policies. San Francisco is a “sanctuary city,” meaning the city does not seek undocumented immigrants and  enforce deportation. According to David Inserra, policy analyst of homeland security and cybersecurity at The Heritage Foundation, sanctuary cities do “as little as possible” to enforce immigration laws.

“The result is that immigrants who should be removed, either because they are here illegally or they have committed some other crime that makes them removable, are not deported,” Inserra said. “In the case of criminal, illegal immigrants, the case to remove these individuals is even stronger, yet some cities do not value the enforcement of the law, to the detriment of their own communities.”

Sanchez had been in custody of the San Francisco County Jail for drug-related charges in March, but was released in April. ICE spokeswoman Virginia Kice said that ICE filed a detainer for Sanchez so that the organization would be aware if he were released from custody. She said ICE received no notification, according to the Associated Press.

But San Francisco County Sheriff’s legal counsel, Freya Horne, said that there must be an active warrant in order for the city to maintain custody of a criminal immigrant.

“It’s not legal to hold someone on a request to detain. This is not just us. This is a widely adopted position,” Horne said.

“It’s a tragedy,” she said. “We all recognize that. But we followed city policy.”

This report has been modified to address variants of the suspect’s name.