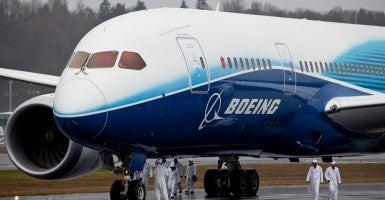 A government watchdog has learned a top-ranking official at the Export-Import Bank deleted text messages sent during the 2014 midterm elections, sparking a lawsuit calling for the recovery of the records.

Cause of Action, a nonpartisan government accountability organization, submitted a Freedom of Information Act request to Ex-Im on Nov. 14, 2014, asking for text messages sent between top bank officials the week of the 2014 midterm elections, Nov. 2, 2014 to Nov. 8, 2014.

As a result of the FOIA request, the group learned that Scott Schloegel, Ex-Im’s chief of staff and senior vice president, deleted critical text messages during this time period.

When Ex-Im replied to Cause for Action’s FOIA request on May 12, 2015, six months later, they informed the group the messages were “accidentally deleted on approximately Jan. 1, 2015.” Additionally, Schloegel said in a signed declaration on March 27, 2015, that he “deleted, by mistake, the messages … on [his] phone for the period in question.”

“The fact that a top official at the Export-Import Bank deleted his text messages several weeks after our organization asked to see them raises serious questions,” Dan Epstein, Cause of Action’s executive director, said in a statement. “Furthermore, it’s puzzling that it took the bank another four months to let us know that this happened.”

“The public deserves to know what their government is up to, and we will work tirelessly to continue to hold these federal agencies accountable,” he continued.

Cause for Action has also filed a legal complaint requesting Ex-Im and the National Archives and Records Administration contact the Justice Department and Congress in an attempt to recover the messages.

Ex-Im provides taxpayer-backed loans and loan guarantees to foreign countries and companies for the purchase of U.S. products. The bank’s charter expires June 30, and its future has been debated among policymakers on Capitol Hill.

As members of Congress prepare to head home for a week tomorrow, Ex-Im’s charter is on track to expire without reauthorization.

Those who oppose extending the bank’s life believe it serves as an engine of corporate welfare and cronyism, and benefits just a handful of politically connected companies.

However, Ex-Im supporters say it helps small businesses compete in the global market and supports jobs in the United States.