What’s Behind the Decline in Abortions Across the US 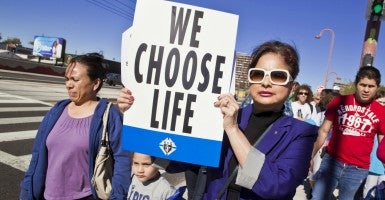 The Associated Press reported last week on a new survey of state health agencies that found abortions in 45 states had fallen by 12 percent since 2010.

The numbers—which stand in contrast to other cultural indicators, such as marriage and out-of-wedlock birth rates—reflect long-term trends regarding abortion. As detailed in the first edition of The Heritage Foundation’s annual Index of Culture and Opportunity, abortion rates (measured as the number of abortions/1,000 women of childbearing age) have been declining in the United States since 1980—and even more rapidly since 1990.

As always, caveats are in order. First among these is the perennial problem with U.S. abortion reporting, still an almost entirely voluntary and state-based system. The Associated Press story excluded several jurisdictions from its report—California, New Jersey, the District of Columbia and Maryland among them—because they collect no current and comprehensive data about abortion within their borders. In 2011, according to the Guttmacher Institute, these four were among the seven jurisdictions with the highest abortion rates in the nation. Their omission is significant.

Second, abortion reporting is not necessarily complete in states that do gather data. Illinois, generally considered a “blue” state, had one of the smallest declines in abortion totals, but the state figures are for surgical procedures only. National trends show a rapid rise in the number of medication abortions (typically done via the RU-486 regimen), and Illinois actually could be seeing an increasing number of abortions rather than a modest drop.

Thus it is hard to posit any single rationale for either the long- or short-term decline in abortions. Advocates of deploying longer-term, reversible contraception (i.e., intrauterine devices and subdermal implants) and of Obamacare insist financing these measures is the primary cause of the decrease in abortion rates. But states with the most liberal policies in these areas—the Northeast and Far West—have much higher abortion rates to begin with and thus more room for significant decreases. And given the rate of unintended pregnancies has remained stable, it is unlikely changes in contraceptive use played much of a role in the decline.

The data show declines happening nearly everywhere, with some of the biggest percentage drops in states such as Indiana, Ohio, Missouri and Oklahoma, which have enacted pro-life legislation and that had much lower abortion rates to begin with. Factors also to be considered in declining abortion rates are the overall increase in teen abstinence, a significant increase in the percentage of women who carry unexpected pregnancies to term and the growth of pregnancy help centers offering no- or low-cost services to abortion-vulnerable women.

An unpublished survey conducted in May 2014 by the Charlotte Lozier Institute underscored the high level of appreciation for pregnancy help centers found among both pro-choice and pro-life women of childbearing age (the percentages are similar for men of the same age). In fact, when presented with four options for the advice they would give to a woman facing an unexpected pregnancy, men and women of childbearing age rank abortion dead last.

Nearly a third of both men and women declined to answer the question (perhaps because they favor the abortion option but were unwilling to say so), but the poll included no language that would have deterred a respondent from asserting a willingness to recommend an abortion provider. Moreover, similar numbers of self-described pro-choice and pro-life respondents indicated their experience at a pregnancy help center was a positive one.

The report continues a string of indicators, decades long, which suggest a steady move toward a culture of life. Millennials’ opinions about abortion are tracking the same way, an indicator perhaps, as The Boston Globe’s Jeff Jacoby pointed out last week, of “an empathy-driven reaction against abortion among the generation of Americans that grew up in a world of vivid ultrasound images.”

Against a frequently bleak landscape of cultural upheaval, America’s trajectory on the tragedy of abortion is an arc of bright contrast.