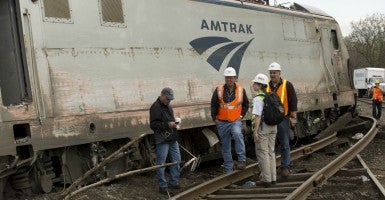 On Tuesday night, an Amtrak train travelling on the Northeast Corridor crashed near Philadelphia, killing at least seven and injuring over 200 others.

The tragic derailment occurred on Amtrak’s most-travelled line. Our prayers are with the passengers and their families, as well as the rescue team that was dispatched to the scene.

It is still unknown exactly what caused the derailment, although early reports indicate that train speed is likely a factor.

Unfortunately, some politicians have already jumped on the incident to further their political agenda.

Following the derailment, Rep. Peter DeFazio, D-Ore., warned Republicans that they need to be “cognizant of the real world out there, of what happened last night, of what the capital needs of Amtrak are, and will not engage in short-sighted budget cutting.” Rep. Steve Israel, D-N.Y., also referred to the impact of congressional funding on the derailment by stating, “We failed them.”

Seizing on the accident to advocate for or against a certain policy—without any idea of what actually led to the crash—is wrong.

National Transportation Safety Board and Federal Railroad Administration officials were deployed to the site and are conducting an ongoing investigation of the crash. The train’s “black box” has been recovered and should aid officials in determining what precipitated the accident.

There is still no definitive word on what prompted the train to maintain excessive speeds, and there is no way to know what could have been done—if anything—to foresee and prevent this particular incident.

There were also cries for hiking spending in the wake of two prominent bridge collapses in Minnesota (2007) and Washington state (2013).

Many pointed to the accidents as evidence that America’s infrastructure was inadequately funded and required more federal spending.

But that conjecturing turned out to be false in both instances. The Minnesota bridge had a construction defect that no amount of maintenance could have detected or fixed, and the Washington bridge fell when an oversized truck improperly tried to cross it.

No amount of money could have prevented either instance.

Amtrak is a safe way to travel and has been for a while. Although fatal accidents are a reality (especially where train tracks intersect with roads), this is the first major accident on the Northeast corridor—which carried 11.6 million people last year—since 1987.

Since 2000, 14 people have died as a result of non-highway related Amtrak accidents such as the one last night.

Arguing for policy changes—including top-line funding levels—before we know what is responsible for the accident is counterproductive. Patience and temperance is required while the investigation is ongoing.

While it’s tempting to assign blame and take action immediately, corrective measures and policy prescriptions can and should be implemented only when it is reasonably certain they are the proper remedy.