In New Role, US Army Prepares Ukrainians for Different Type of War 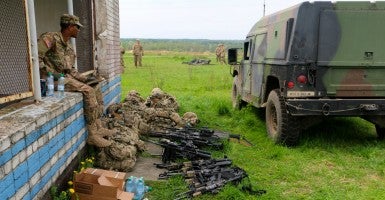 The ongoing U.S. training of the Ukrainian National Guard as part of exercise Fearless Guardian includes a course in the Geneva Conventions and the ethical treatment of prisoners. (Photo: Nolan Peterson/The Daily Signal)

YAVORIV, Ukraine—The sounds of gunfire and explosions are constant on the firing range at the International Peacekeeping and Security Center outside this western Ukrainian town. At one spot, behind an earthen bunker, U.S. Army paratroopers are qualifying Ukrainian National Guard soldiers in Soviet-era shoulder-fired rocket-propelled grenades (RPGs). Further down the line, Ukrainian soldiers shoot at targets using different types of Kalashnikov assault rifles and RPK and PKM machine guns.

Together, the sounds of these Soviet weapons form a booming background din with which some of the U.S. soldiers here are all too familiar.

After a Ukrainian soldier fired an RPG, one U.S. paratrooper turned to another and dryly remarked: “I’ve heard a lot of those things fired in the other direction.”

“Yeah, no kidding,” the other soldier responded. “For a second there it felt like ‘go time.’”

On April 20, about 300 U.S. Army paratroopers from the 173rd Airborne Brigade based in Vicenza, Italy, began training the Ukrainian National Guard as part of a six-month exercise called Fearless Guardian. Like their position relative to the sounds of the Soviet weapons (which the Taliban and al-Qaida often use) on the Yavoriv range, Fearless Guardian marks a reversal for many of the U.S. soldiers here.

For one, unlike U.S. missions to train Afghan and Iraqi soldiers, the U.S. Army paratroopers will not be fighting alongside Ukrainians, leaving the U.S. soldiers in the unfamiliar position of training for a fight in which they don’t expect to have a direct role.

“It’s hard not to get emotionally involved,” Capt. Nick Salimbene, 31, said. “The reality is that in a few months we’re going to be back in Italy, and these guys are going to be in the ATO staring down separatist tanks.”

Fearless Guardian also reflects an evolution of the U.S. military’s role in Europe as it reverts to a Cold War-era mindset.

U.S. soldiers, some of whom have spent their entire careers in counterinsurgency campaigns in the post-9/11 era, are refocusing on state-on-state warfare, such as training to defend against tanks and heavy artillery.

Even the movement of U.S. equipment to Ukraine had a strategic purpose. A convoy from the 173rd’s home base in Vicenza to Yavoriv was used to scout lines of transportation across the region that might be needed for the rapid deployment of NATO assets in a crisis.

“It makes you wonder if the Cold War ever really ended,” Sgt. Alexander Skripnichuk said. The U.S. military is also adjusting to the media spotlight that comes with exercises like Fearless Guardian, which, while an independent exercise, comprises part of a larger rebalance of U.S. military power to Eastern Europe. Highlighting the diplomatic sensitivity of having U.S. troops on Ukrainian soil is an April 17 statement by Russian Foreign Ministry Spokesman Alexander Lukashevich in response to the 173rd’s arrival in Yavoriv.

“We wonder if Washington, London and Ottawa know that they will train the very same Ukrainian ultranationalists from the volunteer battalions who have Nazi symbols on their uniforms and who killed women, children and the elderly during the punitive operations in Donbas,” Lukashevich said. “Will the overseas instructors train them in more efficient methods of killing Russian speakers in Ukraine?”

“It is obvious that U.S. troops will not bring peace to Ukraine,” he added.

Citing the Leahy Law, which prohibits the U.S. from supporting foreign military groups accused of human rights violations, a U.S. military official said the Ukrainian National Guard units involved in Fearless Guardian had been thoroughly vetted. Some prominent units have been left out of the training, however, such as the Ukrainian National Guard Azov Regiment, which Moscow has accused of being a neo-Nazi group.

More than a decade of combat experience in Iraq and Afghanistan has helped U.S. soldiers earn the respect of their Ukrainian counterparts. The attitude of the Ukrainian soldiers to their American trainers is not one, however, of unquestioning gratitude.

The Ukrainians, some of whom have been fighting in eastern Ukraine for more than a year, frequently challenge the Americans’ techniques, reflecting the challenges of fusing the experiences of militaries that have been tested in two very different types of combat with different resources available.

“These guys just came back, they’re fresh,” Salimbene said. “You have to tread lightly because it’s hard to relate. All five of my deployments to Iraq and Afghanistan have been with Ranger units, and we had air superiority. Talk about being spoiled.”

At the RPG range, for example, a Ukrainian insisted on firing left-handed. Initially the American instructor protested, saying, “If you don’t shoot right-handed, you’re not shooting today.”

But after a few minutes of debate, in which the Ukrainian argued that he had shot RPGs left-handed in combat against separatist tanks, the U.S. soldier finally conceded: “Fine. Shoot however you like.”

The Ukrainian hit his target on the first shot.

“This is a two-way street,” Salimbene said. “They can offer me as much as I can offer them. It’s been educational. But it’s been more of a challenge than I expected.”

The occasional butting of heads also highlights differences in military cultures. At an obstacle-breaching course, a Ukrainian officer peppered the U.S. instructor, Sgt. Caleb Michaud, with a series of questions, challenging his techniques on cutting through barbed wire and quizzing him on what to do if the enemy has machine guns zeroed in on his troops.

“But what if we planned to breach at that spot?” the Ukrainian officer countered.

“Then change your plan,” Michaud replied. “We can ask ‘what-ifs’ all day long. Just use common sense.” The U.S. military chain of command decentralizes decision-making from the upper ranks, teaching junior officers and non-commissioned officers to take the initiative to make tactical decisions based on battlefield realities.

“If there’s anything we’ve learned from the last 14 years of war, it’s to trust the guy on the ground,” Salimbene said. “They know what they need.”

The Ukrainian military, however, still reflects the Soviet model, in which decision-making is concentrated at the top of the chain of command, leaving junior officers with little flexibility to exercise their own initiative. Additionally, the role of non-commissioned officers, considered to be the backbone of the U.S. Army, is virtually non-existent within the Ukrainians’ ranks.

Despite some initial friction, the U.S. example seems to be rubbing off on the Ukrainians, who have started to adopt the U.S. chain of command model.

“I think initially they were a little bit stand-offish within the ranks themselves just because, ‘Why is someone else coming to train me? I’ve been to the ATO, I’ve seen what’s going on there,’” said Lt. Col. Kyle Reed, 1st Squadron, 91st Cavalry Regiment commander. “But then when they got into the program, and they started seeing why we were here and the capabilities that we can provide them, I think they really took ownership of it.”

“We’re two very different militaries,” Cpl. Nicholas Stevens, 22, said. “But they seem to grasp the concepts we teach them. They seem grateful.”

Train to the Threat

U.S. soldiers are prohibited, however, from visiting the conflict areas to see firsthand the conditions for which they are training the Ukrainians.

“As close as we can without going there, we have a sense of what tactics are being used,” he added. “We get national military intelligence reports, and we combine that with the feedback we get from the Ukrainian guys coming back from the ATO to adjust the training.”

Fearless Guardian is broken into three two-month blocks. Within each block, a new crop of about 300 Ukrainian soldiers moves through a training pipeline that begins with basic individual skills such as shooting and movement drills, progresses through small-unit tactics, and eventually culminates in combined company-level exercises.

Ostensibly, the U.S. training is not focused on preparing Ukrainians to fight a war against Russia. There is, however, some specialized training tailored to the specific threats Ukrainian soldiers face in the ATO from combined Russian-separatist forces.

The U.S. is training Ukrainians, for example, in countering IEDs (improvised explosive devices), which U.S. forces frequently faced in Iraq and Afghanistan, and are now prolific in the Ukraine conflict. Ukrainian troops are also taught how to conceal themselves from drones (which are observed over their front-line positions daily), as well as how to better encrypt their communications.

“We’re trying to tailor it to them, but not so much because of the whole politics issue,” Sgt. Gregory Crocker, 29, said. “We can’t get involved with that—that’s way above my rank. But we want them to learn these basic soldier skills.” The training syllabus also includes two days of law of armed conflict training, including instruction in the Geneva Conventions and the ethical treatment of prisoners.

“We’re teaching them everything an infantry company should be expected to do,” Weisman said. “It’s a crawl, walk, run process from the individual to the company level.”

Mindful of the propaganda attention focused on their presence in Ukraine, U.S. soldiers are careful about how they describe the intent of Fearless Guardian.

Many paint the exercise as an effort to “help Ukrainians protect their sovereignty,” while others claim the exercise is not geared toward any specific threat or country, but is intended to develop the Ukrainian National Guard as a professional fighting force.

“As we look to the provocation of us merely being here, I don’t think it was really directed just at the combined Russian-separatist forces,” Reed said. “It is really designed for the development of a professional military force within Ukraine.”

For both the U.S. and Ukrainian soldiers, however, the reality of the ongoing conflict in eastern Ukraine looms over the training. U.S. and NATO officials have accused Russia of building up forces in Ukraine to support an upcoming separatist offensive.

“Russian forces used the opportunities presented by the recent lull in fighting to reset and reposition while protecting their gains,” U.S. Air Force Gen. Philip Breedlove, commander of NATO forces in Europe, told the Senate Armed Services Committee on April 30. “Many of their actions are consistent with preparations for another offensive.”

Russia denies aiding the separatists or having troops in Ukraine.

Faced with the near certainty that many of the Ukrainian soldiers under their tutelage will soon be back on the front lines, the U.S. Army trainers in Yavoriv take their training mission personally.

Speaking to a group of Ukrainian soldiers prior to a training exercise, Michaud said: “I know that a lot of you will be going back to the front lines soon, but take this time to learn the things that can keep you and your men alive.”