How Many Illegal Immigrants Have Been Deported in Your County? This Map Has the Answer. 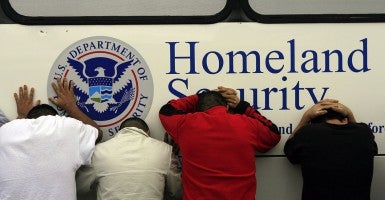 The Center for Immigration Studies has released an interactive map by depicting the number of illegal immigrants deported from each county as part of the U.S. government’s Secure Communities program.

According to the nonpartisan Center for Immigration Studies, the deportations occurred between October 2008 and February 2015. The three counties with the most deportations during this period were Los Angeles County, Calif.; Maricopa County, Ariz.; and Harris County, Texas.

President Obama ordered the end of Secure Communities as a part of his executive actions on immigration last year.

Under the multi-million dollar Secure Communities program, local authorities share fingerprints from everyone booked into jail with federal authorities, who comb the prints for immigrants, those here legally and illegally, so they can be deported.

“We’re going to keep focusing enforcement resources on actual threats to our security,” Obama said in a November 2014 speech when he announced his executive actions. “Felons, not families. Criminals, not children. Gang members, not a mom who’s working hard to provide for her kids. We’ll prioritize, just like law enforcement does every day.”

“And let’s be honest, tracking down, rounding up, and deporting millions of people isn’t realistic,” the president added.

Jessica Vaughan, the Center for Immigration Studies’ director of policy studies and one of the authors of the report, praised the results of the Secure Communities program in a statement.

“It is apparent from this data that few parts of the country are unaffected by illegal immigration,” Vaughan said. “The positive results of the Secure Communities program substantiate the need to facilitate and expand opportunities for cooperation between ICE and its local law enforcement partners.”

Vaughan and co-author Bryan Griffith note that after the president’s executive action, the program was replaced by the Priority Enforcement Program, “which has set up significant logistical and political hurdles for ICE in taking custody of criminal aliens.”