The Nation Is About to Debate Late-Term Abortions. Where Does Your State Stand? 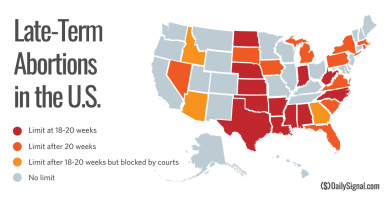 As Congress prepares to resume a debate over whether late-term abortions should be allowed in the U.S., a groundbreaking new study finds that infants are able to survive outside the womb earlier on in a pregnancy than the medical community once thought.

The study, which examined thousands of premature infants, may bolster a national effort by the pro-life community to ban late-term abortions nationwide.

“The latest science demonstrates the ability of very premature babies to survive and even thrive, ever earlier in development,” said Dr. David Prentice, vice president and research director of the Charlotte Lozier Institute—the SBA List’s education and research arm.

Moreover, this study emphasizes that when we intervene and care for them, they survive in even greater numbers and at ages—even at 20 weeks post-fertilization—when doctors and the courts previously considered them not ‘viable.’

The study, published in the The New England Journal of Medicine, showed that with medical treatment, about 23 percent of infants born at 22 weeks survived. One in three of those survivors face serious impairments, such as blindness or deafness.

One in three babies born at 23 weeks were also able to survive, with half of those children surviving without serious problems.

The medical community generally cites 24 weeks as the viable age in which a fetus is able to survive outside the womb.

Now, in the wake of this research, that consensus is being questioned, invigorating the debate over whether women should be allowed, under the law, to have a late-term abortion.

The U.S. is one of only seven developed countries in which late-term abortions after 20 weeks (five months) are allowed, according to a report from the Charlotte Lozier Institute.

>>> Read More: U.S. Is One of Seven Countries That Allows Late-Term Abortion

Late-term abortions performed after 20 weeks, when not done by induction of labor (which leads to fetal death due to prematurity), are most commonly performed by dilation and evacuation procedures, which often involve removing the fetus with forceps or other instruments.

In 2013, a congressional report found that some 11,000 abortions take place each year at 20 weeks or more after fertilization.

Despite there being no national law banning the procedure, a dozen states have taken it upon themselves to limit abortion at 18-20 weeks—Alabama, Arkansas, Indiana, Kansas, Louisiana, Mississippi, North Carolina, North Dakota, Nebraska, Oklahoma, Texas, and West Virginia. In total, 24 states and Washington, D.C., have no limits on late-term abortions.

But now, with Congress set to take on the issue next week, that could all change.

As states play out their own battles over whether to ban late-term abortions, the nation is doing the same.

This week, House leaders confirmed a plan to take up a historic bill that would ban abortions nationwide after 20 weeks of pregnancy.

The measure, titled the “Pain-Capable Unborn Child Protection Act,” is built around a broad consensus of research that shows unborn infants are able to feel pain 20 weeks after fertilization.

“Pain receptors (nociceptors) are present throughout the unborn child’s entire body and nerves link these receptors to the brain’s thalamus and subcortical plate by no later than 20 weeks after fertilization,” the bill, sponsored by Rep. Trent Franks, R-Ariz., states. To perform surgery on unborn children 20 weeks after fertilization, children’s hospitals throughout the U.S. “routinely” administer fetal anesthesia, which the bill states is “associated with a decrease in stress hormones compared to their level when painful stimuli are applied without such anesthesia.”

Hospitals have inconsistent policies regarding the age at which they attempt to save premature babies.

Critics—including some physicians—argue the unborn child is “incapable of experiencing pain until a point later in pregnancy than 20 weeks after fertilization.”

The House legislation attempts to counter that argument, citing recent medical research and analysis debunking the scientific grounds for that theory.

House Majority Leader Kevin McCarthy, R-Calif., told The Weekly Standard today that he remains committed to the Pain-Capable Unborn Child Protection Act, despite it failing in the House earlier this year.

“Life is precious and we must do everything we can to fight for it and protect it,” he said. “Our commitment for the House to consider this important legislation has been steadfast and I am proud of the work of our members to prepare this bill for House consideration next week.” Earlier this year, Republican leadership canceled a highly-anticipated vote on the measure, angering voters who rallied around pro-life candidates during last year’s election.

Female members of the GOP held up that vote, citing their concern over a provision in the bill that would require victims of rape to report it to law enforcement in order to legally obtain a late-term abortion.

Those like Renee Ellmers, R-N.C., were concerned about the reporting requirement because the majority of rape victims don’t ever report their rape to law enforcement.

Some pro-life advocates pushed back against efforts to remove that language, believing that without the reporting requirements, women could still readily obtain a late-term abortion.

When Republican leadership canceled the vote, many thought the Pain-Capable Unborn Child Protection Act was dead.

But now, after lawmakers agreed to remove the rape provision, many are hopeful the measure can pass Congress and reach the president’s desk.

In an earlier statement, however, President Obama vowed to veto the legislation.

“[The legislation] disregards women’s health and rights, the role doctors play in their patients’ health care decisions, and the Constitution,” he said.

But those advocating for the bill, like Dr. Prentice of the Charlotte Lozier Institute, say it’s the unborn children who need protecting.

As medical science continues to show the humanity of babies still in the womb, it changes hearts and minds, and influences laws to protect the youngest and most vulnerable among us.