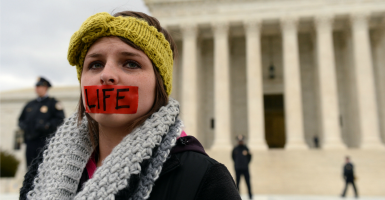 Hours after the Senate allowed a controversial anti-discrimination law to officially take effect in the nation’s capital, a group of pro-life organizations released a joint statement pledging to continue operating in accordance with their beliefs—thereby putting themselves at risk of violating the law.

“Despite the enactment of this unjust law, we will continue to hire employees who share our commitment to the dignity of every member of the human family,” reads the statement released by Alliance Defending Freedom, the Southern Baptist Ethics and Religious Liberty Commission, Americans United for Life and Americans United for Life Action, March for Life, Concerned Women for America, the Susan B. Anthony List, the Family Research Council and the Assoc. of Christian Schools International.

The very purpose of this bill as expressed by its sponsor at the first hearing last June was to require religious employers to provide insurance coverage of all ‘reproductive health’ decisions to their employees, including abortion.

The law, called the Reproductive Health Non-Discrimination Act, ensures that “individuals are protected from discrimination by an employer, employment agency, or labor organization, based on an individual’s or dependent’s reproductive health decisions.”

Critics say the measure “prohibits employers in the District, including nonsectarian pro-life and religious organizations, from ‘discriminating’ on the basis of ‘decisions’ reached by employees related to ‘reproductive health’ matters, including the taking of innocent human life by abortion.”

The D.C. City Council temporarily prohibits the law from being used to force employers to cover abortion procedures, but that exemption expires after 225 days.

The measure, officially transmitted to Congress on March 6, was challenged under the Home Rule Act of 1973.

The Home Rule Act secures Congress the authority to review all legislation passed by the District of Columbia and overrule it within 30 days by using what’s called a “resolution of disapproval.”

On Thursday, the House voted in favor of a resolution that would strike down what conservative opponents call the “anti-religious freedom” bill. The Senate, however, did not schedule a vote on the matter within the 30-day window, essentially abandoning any chance Congress had of overturning the legislation.

In their statement, the D.C.-based pro-life organizations called the House’s vote an “extraordinary step” that “demonstrates just how unprecedented and illegal” the Reproductive Health Non-Discrimination Act is.

They also pledged to continue pressuring Congress to address D.C.’s “egregious violation of the First Amendment and federal law.”

Congress could still act to disrupt the law by attaching a rider to a spending bill, which would ban the city from using any federal dollars to enforce the legislation.

In the wake of the controversy surrounding the federal challenge to local legislation, Democrats, such as Del. Eleanor Holmes Norton, D-D.C., accused Republicans of overstepping “the local democratic rights of 650,000 District residents” and furthering the “war on women.”

“The goal here is to resume the war on women,” Norton, the District’s non-voting member of Congress, said Thursday while speaking on the House floor.

“Republicans need to recognize that your own health care choices are not your boss’s business,” she said.

But pro-life organizations also feel under attack, and pledge to “vigorously resist” efforts to violate what they consider “constitutionally protected fundamental rights.”