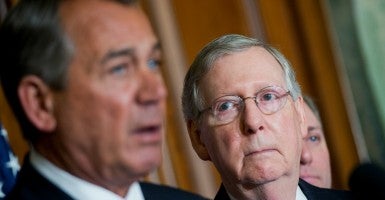 In a historic move, the House voted late Thursday in favor of striking down a Washington, D.C., anti-discrimination law that opponents say infringes on the ability of organizations to operate in accordance to their religious beliefs.

The Senate, however, is choosing not to move forward with its own vote, essentially blocking any chance of overruling what many Republicans consider “anti-religious freedom” legislation in the nation’s capital.

Some believe the Senate decided not to hold a vote in wake of the firestorm that occurred after Indiana passed a law in favor of protecting religious liberty.

“Standing up for liberty should be a minimum requirement for elected officials,” said Dan Holler, communications director for Heritage Action, which is the the advocacy arm of The Heritage Foundation. Heritage Action supports striking down the law.

“Not only that, the political implication of further alienating the pro-life movement is likely to be substantial,” Holler said.

“The political implication of further alienating the pro-life movement is likely to be substantial,” @DanHoller.

The controversy surrounds a law called the Reproductive Health Non-Discrimination Act, which ensures that “individuals are protected from discrimination by an employer, employment agency, or labor organization, based on an individual’s or dependent’s reproductive health decisions.”

Congress used a rare measure called a “resolution of disapproval” in attempt to kill the law, which, with the support of both houses and the president, would overrule the legislation passed by the D.C. City Council.

The political tactic hasn’t been used in over two decades, and local lawmakers such as Del. Eleanor Holmes Norton, D-D.C., view the effort as a violation of “the local democratic rights of 650,000 District residents.”

Congress reserved the power to do so under the Home Rule Act of 1973, which secured lawmakers the authority to review all legislation passed by the District of Columbia and overrule it with a resolution of disapproval.

Norton, speaking on the House floor Thursday afternoon, accused Republicans of furthering the “war on women,” in fighting the legislation.

“The goal here is to resume the war on women,” she said. “The predicate for getting to the nation’s women is the D.C. Home Rule Act. It goes after self-government and women at the same time.”

“The goal here is to resume the war on women,” @EleanorNorton.

The resolution of disapproval passed the House on Thursday largely along party lines, with 13 Republicans voting against it.

On March 18, Sens. Ted Cruz, R-Texas and James Lankford, R-Okla., introduced an identical version to overturn the legislation in the Senate, but leadership failed to schedule a vote before the 30-day deadline Congress had to act.

In a press release this morning, Cruz not only criticized Congress for “running the clock to the eleventh hour” in regards to the Reproductive Health Non-Discrimination act, but D.C.’s Human Rights Amendment Act as well.

Conservatives, like Cruz, argue this policy would infringe on the ability of private schools to operate according to their religious beliefs.

“The District of Columbia’s [Human Rights Amendment Act] would allow fines or penalties against religious schools that sincerely believe it violates the tenets of their faith to support homosexual activities on campus,” Cruz said.

“If the [Human Rights Amendment Act] is not repealed, then a group of students could sue to force a private religious school to provide official recognition, facilities, and financial support for homosexual student activities on campus against the school’s sincerely held religious beliefs.”

Rep. Vicky Hartzler, R-Mo., led the effort against the Human Rights Amendment Act in the House, but the Oversight and Government Reform Committee never brought that resolution to a committee vote.

The D.C. City Council is now predicting both laws will go into effect Saturday, May 2.