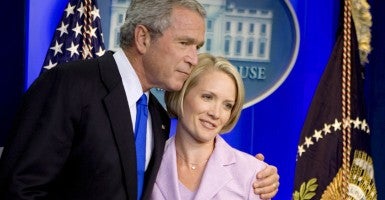 Dana Perino’s new book features a touching encounter between President George W. Bush and an injured—and intubated—Marine receiving the Purple Heart. She follows it with another story involving a dying soldier’s mother yelling at the president about the war.

Both stories were recounted by Perino in an excerpt from “And the Good News Is…” that was published by The Daily Signal this week. But if you listened to NPR’s interview with the former White House press secretary on “Morning Edition” today, you would’ve only heard one.

>>> Dana Perino: Why George W. Bush Let a Soldier’s Mom Yell at Him

NPR’s edited version of the interview that aired included the story about the mother who yelled at Bush, but not the more uplifting story about the Marine, who happened to be intubated in his hospital bed but opened his eyes upon Bush’s comments to the Marine’s son.

Here’s part of that story:

The CNO [chief of naval operations] held the medical team back and said, “Hold on, guys. I think he wants the president.”

Perino told The Daily Signal she recounted the whole story to NPR’s David Greene when he asked about the hospital visit. When The Daily Signal reached out to NPR to understand why it chose to feature only part of Perino’s interview, a spokeswoman told us this:

Dana Perino told many anecdotes in her wonderful interview. It’s too bad we could not include them all because of time constraints.

She spoke, for example, of the president’s graciousness with her father. She also spoke of a mother who yelled at him—and then described how the president quite deliberately stayed and listened and absorbed the woman’s anger. It was an interaction the president himself remembered on Marine One, as Dana recounted. For these reasons, we chose to include it, while making sure to highlight that the reaction in that room was an exception.

You can find the entire story—and more—in Perino’s excerpt on The Daily Signal.