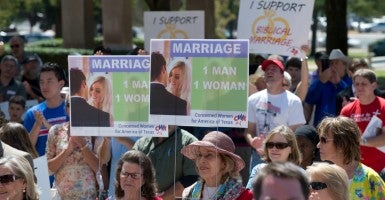 Sunday’s New York Times stated plainly what many of us have known for a while: Our nation’s elites are intolerant of ordinary Americans.

The reporter for the Times revealed a startling reality: “In dozens of interviews, lawyers and law professors said the imbalance in legal firepower in the same-sex marriage cases resulted from a conviction among many lawyers that opposition to such unions is bigotry akin to racism.”

That’s right. Our nation’s legal elites think that the belief that marriage is the exclusive union of husband and wife is “bigotry akin to racism.” That’s a problem. And it explains the growing intolerance showed toward ordinary Americans who believe the truth about marriage.

It also raises a profoundly important question: Will the government respect their rights of conscience and religious liberty?

This isn’t an idle question or dangerous fear-mongering. Throughout the past several years, a constant refrain from the Left has been that people who oppose same-sex marriage are just like people who opposed interracial marriage—and that the law should treat them just as the law treats racist bigots. Of course that argument is not true, but that hasn’t stopped our elites from making it.

The Times noted that while the same number of amicus briefs have been filed at the Supreme Court supporting and opposing state marriage laws, no major law firm had filed a brief supporting marriage as the union of a man and a woman. (Full disclosure: I spoke with The New York Times reporter and am quoted in the article.)

Two weeks ago, we saw in Indiana how Big Business, Big Media and political leaders all used their influence to bring down good religious liberty protections. This confluence of Big Business and Big Government has a name: I call it “cultural cronyism.” The same is true for Big Law.

While Big Business is against religious liberty, Big Law is against marriage. The basic viewpoint was captured in yesterday’s New York Times article:

Gay rights advocates offer their own reason for why prominent lawyers are lined up on one side of the marriage cases. “It’s so clear that there are no good arguments against marriage equality,” said Evan Wolfson, the president of Freedom to Marry. “Lawyers can see the truth.”

This statement is presumptuous and self-serving.

Surprise! Lawyers can be ideologues too. And these ideologues at the most elite sectors of society—Big Business, Big Law and Big Government—want to penalize and coerce ordinary Americans with traditional beliefs about marriage.

We must fight back.

But our governing elites do. So people who believe the truth about marriage need to equip ourselves, because our opponents want to see the law treat all citizens who believe marriage is the union of husband and wife as if they are racists.

But as I explain in this Heritage Backgrounder, great thinkers throughout human history—and from every political community up until the year 2000—thought it reasonable to view marriage as the union of husband and wife.

Bans on interracial marriage and Jim Crow laws, by contrast, were aspects of an insidious movement that denied the fundamental equality and dignity of all human beings and forcibly segregated citizens. When these interracial marriage bans first arose in the American colonies, they were inconsistent not only with the common law inherited from England, but also with the customs of prior world history, which had not banned interracial marriage.

And while the Bible says marriage has nothing to do with race, the Bible insists that it has everything to do with sexual complementarity. From the very beginning of Genesis to the very end of the Book of Revelation, the Bible is replete with spousal imagery and language of husband and wife. So whether from faith or reason or universal human experience, America’s elites must not be allowed to coerce and penalize their neighbors who remain steadfast in the truth about marriage.

America is in a time of transition. Courts have redefined marriage, and beliefs about human sexuality are changing. Will the right to dissent be protected? Will the right of Americans to speak and act in accord with what the United States had always believed about marriage—that it’s a union of husband and wife—be tolerated?

Even if the legal definition of marriage is changed for public policy purposes, should that entitle activists to silence citizens and eradicate charities, schools and businesses that simply ask for the freedom to operate according to this belief?

The United States is a pluralistic society. We need to maintain civil peace even amid disagreement. Our nation’s elites aren’t helping.