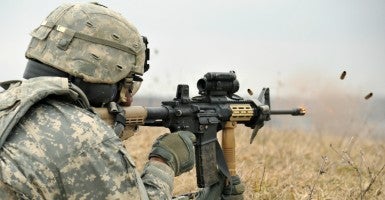 “There will also be some training for headquarters personnel,” Wrenn said, “focusing on the continued professionalization of Ukrainian staff members.”

In mid-March, the United Kingdom announced it had sent 35 military trainers to Ukraine for a two-month deployment.

The joint U.S.-Ukraine event will take place at the International Peacekeeping and Security Center in the western Ukrainian town of Yavoriv, near the border with Poland and more than 800 miles from the conflict areas.

The mission will be funded by the Global Security Contingency Fund (GSCF), which was created in 2012 to pool Pentagon and State Department resources “to carry out security and counterterrorism training, and rule of law programs,” according to a Congressional Research Service report.

While the U.S. has quietly been sending military advisers to Ukraine for months, the upcoming exercise marks the first large-scale deployment of U.S. military personnel to Ukraine since the separatist conflict began last year.

>>> Ukraine Cracks Down on Oligarchs and Volunteer Fighting Battalions

According to Ukrainian media reports, following the training exercise, the U.S. military trainers will hand over ammunition and communication equipment to the Ukrainian troops.

Wrenn confirmed that communication equipment would be given to the Ukrainians, but added, “[W]e at Army Europe are not aware of any ammunition being provided following the training.”

Both the EU and the United States have been reluctant to send weapons or ammunition to Kyiv for fear of escalating the conflict. NATO accuses Russia of sending weapons, ammunition, supplies and its own troops into Ukrainian territory to assist pro-Russian separatists. Moscow denies providing assistance to the separatists. The U.S. delayed plans to send troops to Ukraine in March, however, out of fear that the move could spur Russia to escalate its support for the separatists and derail the shaky cease-fire.

“The start of the training was delayed to try and provide some more space to see that the cease-fire and the full Minsk agreement could be successfully implemented,” Lt. Gen. Ben Hodges, commander of U.S. Army Europe, said during a March 17 breakfast with reporters in Washington, according to reporting by The Wall Street Journal.

Russian Foreign Minister Sergey Lavrov warned that the presence of U.S. and British military personnel on the ground in Ukraine, even as trainers, risks escalating the conflict.

“Provocateurs in Kiev and those who support the ‘party of war’ might attempt to cook something up in the hopes of inflaming world public opinion, resulting in weapons flowing into Ukraine. We must keep a close eye on this,” Lavrov said, according to a translated TV interview provided by the Russian Ministry of Foreign Affairs.

The U.S. recently delivered the first batch of 10 out of a total of 230 Humvees pledged to Ukraine in a $75 million military aid deal. The package also includes unarmed Raven drones, night-vision goggles and communication equipment.

While U.S. support for Ukraine has been mounting, some in Congress say it’s not enough.

“It is absolutely necessary that President Obama prioritize and expedite the provision of defensive lethal and non-lethal military assistance to Ukraine in light of the January attacks by Russian-backed rebels on the civilian population in Mariupol,” said the Senate resolution’s author Sen. Ron Johnson, R-Wis., in a statement.

Underscoring the stakes of the upcoming U.S. training mission, Monday’s announcement comes as worries rise in Kyiv about the durability of the Feb. 15 cease-fire and whether Russia is staging for a large-scale intervention in Ukraine.

“The likelihood of a full-scale attack by Russian armies is high and remains high,” he said. “All our intelligence indicates it. There is a concentration of Russian troops on the border and not only in Donetsk and Luhansk but extending up to Kharkiv. A huge expansion of Russian troops is taking place.”