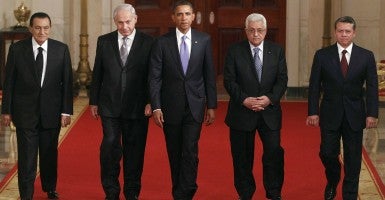 President Obama sure knows how to get the world’s attention. His public tantrum over Benjamin Netanyahu being invited to speak before a joint session of Congress pretty much assured that the entire globe would tune in to hear the Israeli prime minister enumerate his concerns over a nuclear deal with Iran.

This soap opera offers a potent reminder of the sorry state of U.S. policy in the Middle East, a policy that has pulled the closest of allies the furthest apart on the most important issues. While the fate of the Iran agreement may play out over the next few months, much of the Middle East muddle will remain until Obama vacates the Oval Office and beyond. So it’s is not too soon to start thinking about how to live with the mess this administration will leave behind.

Obama has misunderstood the region at every level. The next presidential team will have to do better—not only grasping all the relevant frameworks that govern the greater Middle East, but jettisoning the bad reasoning that clouds everything the White House has done. Here are five key frameworks.

The Middle East is an important region to the rest of the world. If it were not, great powers would not be much bothered with its fate. But the Middle East does matter—it was, is, and will remain an arena of geostrategic competition. No White House can neglect the fact that outside powers will always jockey for influence in this part of the world.

Obama inherited a situation where the United States was, for the most part, the only foreign power with significant sway in the region. His response to U.S. dominance was to walk away from it—ignoring the Green Revolution in Iran, packing up the bags and pulling out of Iraq, leading from behind in Libya, fumbling on Syria, and remaining a bystander to the rest of the Arab Spring.

Even now, faced with the Islamic State crisis, many in the region scratch their heads as they ponder the question: what is Obama’s real endgame?

Geostrategy abhors a vacuum. If America doesn’t want to lead, others will step in and try their hand. That’s not good for the region or the United States. No other outside power has the capacity to really make a decisive difference in the region. Further, the U.S. goal for the greater Middle East is constructive: to see its peoples at peace and prosperous, with the ability of goods and services to follow freely across the commons.

The administration’s posture toward the region has alternated between indifference and kibitzing on pet projects like promoting a Palestinian state. The first job for the next administration will be to replace this drifting with a serious geostrategy for exercising leadership in the Middle East.

A Nest of Nation-States

It is wrong to think of the countries of the region as mere pawns on global chessboard. Yes, the Great Game goes on. But individual states matter. The problem for the region is that many states are not very good. They are characterized by high levels of corruption, poor governance, weak rule of law, and poor human rights records.

Obama’s problem is he never seriously tried to do much about any of that. The President’s conference on violent extremism and pronouncements from administration officials that battling terrorism was all about “jobs” epitomized Washington’s fecklessness. This White House has done next to nothing to help address the underlying structural weaknesses of many of the strategically important states in this part of the world.

Tunisia is a case in point. It is the birthplace of the Arab Spring. The people there have quelled the threat of an Islamist takeover, and both civil society and the government have committed to reforms that advance economic freedom. Tunisia presented the United States with a long list of how America could help advance those reforms. What it got from the White House was little more than a photo-op.

No nation needs a dose of economic freedom more than Egypt. Of the 15 countries in the region, this important regional power ranks a lowly 12th according to the latest Index of Economic Freedom published by The Heritage Foundation and The Wall Street Journal. Cairo needs partners to advance free market initiatives, yet Obama continues to treat the nation’s leaders as little better than “untouchables.”

Delivering an agenda for building economic freedom and good governance in the region ought to be a high priority for the next president. This will be a real challenge as most of the traditional “tools of development” have a much better record at transferring U.S. tax dollars to others rather than delivering real results. In the end, U.S. government dollars are probably the least effective means of improving lives throughout the region. Promoting free trade and governance reforms that fight corruption, protect property rights, and uphold the rule of law will deliver much better results.

The War of Ideas

A great ideological struggle persists over the region, transcending great power politics and state borders. It is the war between freedom and totalitarianism. Over the last two centuries, fascism, communism, and socialism have all made a run at competing with the liberal Western ideology for the hearts and minds of peoples in this part of the world. Islamism, too, has battled to quash Western modernity for well over a century. Its ugly face includes the likes of the Muslim Brotherhood, Wahhabism, al-Qaeda, ISIS, and the Iranian mullahs.

Obama has simply eschewed serious engagement in this war. By refusing to employ the word “Islamist,” he abandons the cause of many in the region who are trying to refute extremist religious beliefs and is justifying an illiberal political order often imposed with the most horrific violence. Obama’s rhetoric is so divorced from the ideological struggle in the region that no one—from liberal reformers to ISIS butchers—takes him seriously. Further, by parroting the enemy’s narrative—such as when he recounts the alleged sins of the West from the Crusades to colonialism—Obama actually reinforces the Islamist message that this really is a battle of Islam against the West.

Further down the chain of “smart diplomacy,” things are little better. American instruments of public diplomacy, like the Broadcasting Board of Governors, are in disarray or spouting convoluted, “nuanced” messages that convince no one.

Just righting public diplomacy efforts however, won’t win the war of ideas in a part of the world where “honor” and “respect” go to the powerful. To tip the balance in the war of ideas, it will be necessary to engineer crushing military defeats on the likes of ISIS and al-Qaeda; help marginalize destructive influences like Iran, Hezbollah, Hamas, and the Muslim Brotherhood; and lift up native champions of freedom.

The great schism between Shia and Sunni is never far below the surface of many of the region’s conflicts. Any strategy that seeks to shape the future of the region must take it into account.

Obama could not have messed this one up more. Many Sunnis, for example, are convinced both that Obama’s nuclear deal with Iran is bound to fail, leaving them under Tehran’s terrible nuclear shadow. They interpret the administration’s dedicated dialogue with Iran as evidence that Washington is siding with the Shia over the Sunni.

There is no easy answer for bridging Sunni-Shia animosity. But the next administration can begin by worrying less about how sectarian factions feel about one another and more about how they feel about us. Building trust and confidence with various factions is about gaining their respect, and not by getting them to like us, accommodating anybody (least of all, regimes like the one in Tehran), or pleading with them to believe we are on their side. If Sunnis, Shia, Christians, Kurds, and others respect American power and the protection it brings, then they are more likely to cooperate with us—if not so much with each other.

Of all the forces that animate action in the region, tribal relations are the most ancient and enduring. And here, the administration seems clueless. Its most “thoughtful” thinker on this subject is Vice President Biden, who suggested carving countries like Iraq into little “tribal fiefdoms.”

The future of the region, however, can’t be secured by trying to realign borders along ancient tribal lines. First of all, no one would respect the lines; there would just be more tribal wars instead of state-on-state wars. Second, tribal bonds in the region are neither uniform nor static. In Jordan, for example, traditional tribal structures are under a great deal of stress.

Accounting for tribal influences has to be part of regional, sub-regional and intra-state strategies that nest together like matryoshka dolls. That’s hard work. To develop constructive relationships and actions in the region, the United States needs to recruit a better class of experts in the National Security Council, State Department, the intelligence community and at the Pentagon.

The United States cannot afford a future that flips back and forth between George W. Bush’s wars and Obama’s indifference (and wars). The only way to protect our interests and exercise real leadership is to navigate the five-ring circus that makes up the collective mind of the Middle East.

Future U.S. strategy must be based on building strong bilateral relationships with key countries. These relationships will give American leaders the flexibility to exert influence at all five levels of the regional struggle and create a firebreak against the destructive forces that are trying to rip the Middle East apart. The core of those bilateral relations could well start with a string of countries running from Tunisia to Morocco, Egypt, Israel, Jordan and Iraq.

The next president will need to take a much more sophisticated, proactive, and serious approach to the greater Middle East than the one we’ve seen for the last six years.