How Liberals Are Trying to Intimidate Roberts Court in King v. Burwell Case 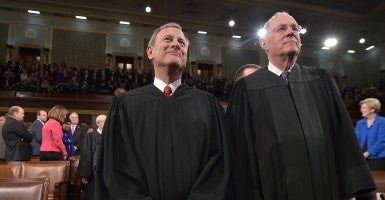 On Wednesday morning, the Supreme Court will hear oral argument in King v. Burwell, a challenge to Obamacare that could gut a core provision of the law.

In the lead up to the oral argument, many Obamacare supporters are attempting to influence the justices, particularly Chief Justice John Roberts, who cast the pivotal vote in the first challenge to Obamacare, National Federation of Independent Business v. Kathleen Sebelius.

The IRS, however, extended the tax credits through a creative interpretation of “state” to mean “federal government,” which led to King v. Burwell and other lawsuits challenging that interpretation. The Obama administration argues that a cramped reading of the statute frustrates its purpose of expanding insurance coverage and that the Court must look at the broader context of the law.

The administration went so far as to assert that the phrase “established by the State” in the statute “reflects style and grammar—not a substantive limitation.” Judicial Crisis Network’s Jonathan Keim points out in National Review that this “flies in the face of common sense, not to mention the longstanding interpretive canon requiring courts to construe statutes to avoid surplusage.” With arguments like this, it’s no wonder the Left is resorting to attempts to intimidate Chief Justice Roberts. After all, it appeared to work in the last go-around, and even President Obama joined in—chiding the Court not to take the “unprecedented, extraordinary step” of striking down Obamacare’s individual mandate provision.

Chief Justice Roberts is known for being a minimalist and views judges as umpires—it’s their job to “call balls and strikes,” not to “pitch or bat.” As chief justice, he has worked to bring unanimity, collegiality, and nonpartisanship to the Court. In a 2007 interview with Jeffrey Rosen of The Atlantic, Roberts explained:

Politics are closely divided…The same with the Congress. There ought to be some sense of some stability, if the government is not going to polarize completely. It’s a high priority to keep any kind of partisan divide out of the judiciary.

Thus, Obamacare supporters are taking aim at the reputation of the Roberts Court, in a bald-faced effort to persuade Roberts to rule in favor of the administration.

In the New York Times, Linda Greenhouse cautioned, “The court has permitted itself to be recruited into the front lines of the partisan war. Not only the Affordable Care Act but the court itself is in peril as a result.” She continued: “The fate of the statute hung in the balance [with National Federation of Independent Business v. Sebelius] and hangs in the balance today, but…[t]his time, so does the honor of the Supreme Court.” Any justice who rules in favor of the challengers in King v. Burwell, Greenhouse admonished, will “have a great deal of explaining to do.”

Ruth Marcus warned in the Washington Post a ruling against the administration would “embody the judicial activism the conservatives repeatedly disavow, elevating policy antipathy to the health-care law over settled legal principles.” The Post’s Supreme Court correspondent Robert Barnes wrote, “[T]he eponymous head of the Roberts court has the most to lose. After all, its decisions cannot be respected if the court is not respected.”

ThinkProgress Editor Ian Millhiser predicted, “Should Roberts turn around and gut Obamacare in King, he would only confirm many people’s fears that the Supreme Court has become the judicial wing of the Republican Party.” In “9 Judges, 9 Million Lives,” a video produced by the Center for American Progress, health law scholar Timothy Jost claimed, “A 5-4 decision invalidating the premium tax credits would seriously call into question the legitimacy of the Court…I think it’s going to be [decided] pretty transparently for political reasons.” And in the subtly-titled “Americans Will Know Who to Blame if the Roberts Court Wrecks Our Healthcare System,” Paul Gordon wrote for The Huffington Post, this Court has “a history of bending the rules, twisting the law, and doing whatever it takes to get to an outcome beneficial to conservative and corporate interests.”

Hopefully Chief Justice Roberts will tune out these and any other attempts to influence how the Court interprets the relevant Obamacare text in King v. Burwell. Too often, the justices are considered politicians by another name, and this lobbying campaign only helps further that misperception. Luckily, the Supreme Court is not accountable to the court of public opinion. By design of lifetime appointments, the justices were intended to be insulated from the whims of the political branches of government and the fleeting passions of the people. Thus, the Supreme Court justices should not concern themselves with the opinion pages of The New York Times.