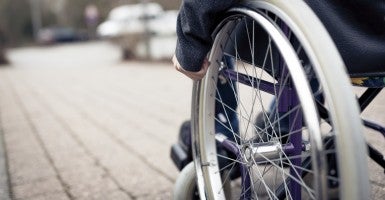 What happens when Social Security Disability Insurance, an integral program that provides benefits to the disabled who are unable to work, runs out of money in 2016?

The percentage of the working-age population on disability rolls has more than doubled from 2.3 to 5 percent since 1990.

However, some, including the Obama administration, are advocating transferring funds from Social Security’s retirement program to the tune of $330 billion over five years, without meaningful program reforms. Social Security’s retirement program is an easy target because it has more money on paper now—but it faces a 75-year shortfall 10 times as large as the disability program.

To address the immediate crisis of the disability insurance shortfall, Heritage’s Romina Boccia, the Grover Hermann research fellow, hosted a panel of experts on Capitol Hill last week that briefed staffers and other stakeholders on the problems with the current program as well as introduced ideas lawmakers should consider in reforming disability insurance.

The disability program suffers from various problems. The percentage of the working-age population on disability rolls has more than doubled from 2.3 to 5 percent since 1990.

While part of this trend is accounted for by changing demographics, researchers at the Federal Reserve Bank of San Francisco identified that at least half of the increase is due to other factors.  As benefits have become more accessible and desirable, concerns that more individuals are improperly turning to disability insurance as a long-term unemployment or early retirement program are rising. Jason Fichtner, a senior Mercatus Center research fellow with experience working in the Social Security Administration, which administers retirement and disability benefits, explained that “once someone gets on DI, they don’t tend to come off.” As evidence, he pointed to the age-and-sex adjusted Disability Insurance termination rate—the percentage of those who leave the program—which is at a 40-year low.

The current program structure is weak on incentives to return to the workforce and focuses on beneficiary incapacity. Fichtner argued that merely transferring more funds without reforms to the eligibility and benefit components of the program is not an adequate solution that provides long-term viability.

Committee for a Responsible Federal Budget’s Marc Goldwein also noted that a “clean reallocation not accompanied by reforms” would be a “mistake” and a “huge missed opportunity” to improve the program for its beneficiaries and the taxpayer. He said that arguments that “clean reallocations” are standard procedure and have been done numerous times in the past are a poor presentation of the actual historical record.

According to the Committee, “there have only been 6 pieces of legislation reallocating payroll taxes. And reallocation has rarely been clean–four of the six bills were enacted in the context of major reforms to the program.” A “clean” reallocation without reforms happened in 1994 with the argument that Congress needed more time to consider program reforms. It succeeded in taking the issue off the minds of lawmakers until now when demographic forces have made the situation even more dire.

Overall, the panelists stressed that the disability insurance program needs fundamental reform in order to provide for those who truly need the benefits and help those who can recover from their disability return to the workforce.

Boccia stressed that the program needs to do a better job of tailoring benefits to different recipients, so that disability insurance could serve as “ a safety net for those who are temporarily disabled,” but one that does not “trap them in it” for life. She suggested implementing a needs-based period of disability for those beneficiaries for whom recovery is expected and possible. Then-Sen. Tom Coburn, R-Okla., included such a proposal in the Protecting Social Security Disability Act of 2014. Fichtner concurred, stating that the government should “help people stay attached to the workforce instead of putting them on DI rolls and forgetting about them.”

Congress needs to act fast, however. “The longer we wait,” Fichtner remarked, “the more dramatic changes to benefits and taxes” will need to be made in order to secure Social Security’s programs.

Instead of providing an unconditional bailout that will only prolong and exacerbate problems in the disability and retirement programs, Congress should pursue reforms now to ensure both are fiscally sustainable for individuals who truly rely on them.

For more Information on Disability Insurance, please see “What Is Social Security Disability Insurance? An SSDI Primer” for an account of the application process, benefit formulas, work incentives and financial structures of SSDI in order to assist policymakers in identifying areas ripe for reform.