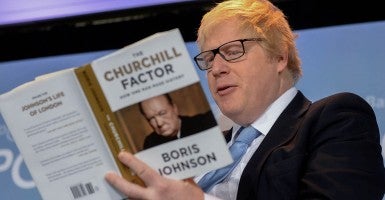 Johnson, who appeared at a Politico event hosted by Mike Allen this morning, heaped praise on Clinton, whom he met earlier this week in New York. Their meeting included foreign policy topics ranging from Russia to the fight against the Islamic State.

Clinton had a “firmness toward the Brits,” Johnson said, noting that Clinton’s take on British role toward Russian President Vladimir Putin should be to “stick it to him.” Johnson clarified he was using rudimentary words to summarize what Clinton told him.

“Her general anxiety was that Putin, if unchallenged and unchecked, would continue to expand his influence in the perimeter of what was the Soviet Union,” Johnson said. “I was very, very struck by that.”

The mayor, who in 2007 described Clinton as a “sadistic nurse in a mental hospital,” today called her “charming.”

But one foreign policy experts questions if Clinton deserves the praise.

“Boris Johnson is a good friend of the United States, but Hillary Clinton has been no friend to Britain,” said Nile Gardiner, director of the Margaret Thatcher Center for Freedom at The Heritage Foundation.

“As secretary of state, Clinton knifed Britain in the back over the Falklands issue, behaving in a Brutus-like fashion toward America’s closest friend and ally,” Gardiner said. “Some of Clinton’s supporters like to compare her to the Iron Lady. I knew Mrs. Thatcher, and Clinton is no Thatcher.” “The mass starvation of millions of North Koreans by the regime in Pyongyang was also conveniently swept under the carpet, as was continuing human rights violations by China and Russia,” Gardiner wrote in a report for The Heritage Foundation about the “invisible” secretary of state.

Johnson, a Conservative Party politician, is one of the favorites to replace David Cameron should the prime minister fail to win in the next election.