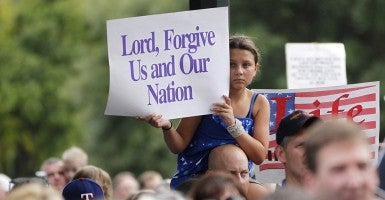 An anti-abortion rally in Austin, Texas in 2013. (Photo: Mike Stone/Newscom)

Washington, on the other hand, doesn’t seem to realize that Americans believe 5-month-old unborn children deserve have to their right to life protected. Or that as a nation, America says that when a child is moving, can hear and has a heartbeat, that child deserves the right to live—and deserves a nation that honors that right.

On Wednesday night, House Republican leaders canceled plans to have a vote Thursday on the Pain Capable Unborn Child Protection Act. The legislation would have banned abortions after 20 weeks, except in cases where rape or incest had been reported to authorities.

“The evening switch comes after a revolt from a large swath of female members of Congress, who were concerned about language that said rape victims would not be able to get abortions unless they reported the incident to authorities,” reported Politico.

But this bill passed in the House in 2013 without controversy over the exceptions. Furthermore, polling about this legislation specifically mentioned how the exceptions would work.

“In 2013 the House of Representatives approved legislation that would ban virtually all abortions nationwide after 20 weeks of pregnancy, except in cases of rape and incest that are reported to authorities,” Quinnipiac University told poll respondents. “Would you support or oppose such legislation?”

They knew exactly what the exceptions were—and they still backed the legislation.

It’s unclear if the exception is even the true reason some GOP members revolted. It may have been over an unwillingness to pursue the social issues.

“Rep. Renee Ellmers repeated her critique from the GOP’s retreat in Hershey, Pa., last weekend that voting on abortion bills so early in the session would turn off millennial voters,” reported National Journal.

Ironically, the Quinnipiac poll found that 57 percent of 18- to 29-year-olds backed the 20-week ban on abortion.

When’s the last time GOP has backed a policy that has had nearly 6 out of 10 millennials supporting it?

But they also care about life. They care about making the United States a humane nation, a nation that says no, we will not tolerate the legal killing of children who are this developed, who are as a little as a week away from being able to survive outside of the womb if born premature. (In 2011, Frieda Mangold, born at 21 weeks, survived.)

Virtually every other country says it is unacceptable for a child this old to be aborted. Only seven countries in the world—including United States, North Korea and China—allow elective abortions after 20 weeks.

Americans have spoken—and have said loudly and clearly they care about this. They care about making the United States a country good enough to protect the right to life for these children.

It’s time for Washington to listen.