Palestinians May Get U.S. Funding Due to Sloppy Work in Congress 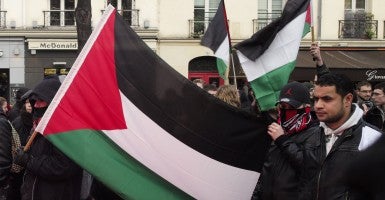 The Palestinians submitted a request to join the Rome Statute of the International Criminal Court (ICC) on Jan. 2, 2014. United Nations Secretary-General Ban Ki-moon, acting in his capacity of treaty depositary, found the instrument of accession was in order on Jan. y 6, 2014, despite the fact that the U.S. Department of State insists that the Palestinians should not be allowed to join the ICC based on the fact that Palestine is not a sovereign state. As things stand, the Rome Statute will enter into force for the Palestinians on April 1, 2015.

The reason that the Obama administration and Congress have opposed this move by the Palestinians is its concern that they would use the ICC to launch politically-motivated criminal investigations against Israel. That concern was validated almost immediately as the Palestinians formally accepted ICC jurisdiction dating back to the start of the Israeli-Palestinian conflict last summer on June 13, 2014. On Jan. 16, the ICC prosecutor announced that she had formally opened a preliminary investigation into the situation in Palestine.

The Palestinian actions would seemingly trigger a provision contained in the Consolidated and Further Continuing Appropriations Act, 2015 that states:

None of the funds appropriated under the heading “Economic Support Fund” in this Act may be made available for assistance for the Palestinian Authority, if after the date of enactment of this Act–…

Not so fast! The Obama administration, apparently intent on continuing to fund the Palestinians no matter what provocations they commit, has responded to congressional inquiries that neither the Palestinian decision to accept ICC jurisdiction and refer the events occurring last summer to the court, nor the prosecutor’s subsequent decision to begin a preliminary examination trigger the legislation because neither events are a “judicially authorized investigation.”

This tortured reading obviously violates the spirit of the legislation. After all, “initiate” means to start the process, not to continue it through the middle to the end. Indeed, it is tantamount to saying that an investigation does not start when police inspect a crime scene, search for suspects and gather evidence, but only after a court approves a warrant or indictment.

But Congress only has itself – and the administration’s habitual willingness to stretch the law as far as it can – to blame. Nowhere in the Rome Statute is there a reference to a “judicially authorized investigation.” The closest parallel is the Pre-Trial Chamber that “upon examination of the request and the supporting material, considers that there is a reasonable basis to proceed with an investigation” if the ICC prosecutor initiates an investigation proprio motu (“on his own impulse”).

But the issue is whether to proceed with an existing investigation, not whether an investigation may be initiated. Indeed, as made clear in numerous announcements, when the situation involves a referral from a State Party (which the Palestinians will be in April), it is the ICC prosecutor who determines if there is a reasonable basis to open an investigation based on the conclusions of the preliminary examination. As summarized by the ICC:

States Parties or the United Nations Security Council may refer situations of crimes within the jurisdiction of the Court to the prosecutor. The prosecutor evaluates the available information and commences an investigation unless he determines there is no reasonable basis to proceed.

Did Congress mean that Palestinian aid should continue until the Pre-Trial Chamber allows a proprio motu investigation to proceed? Perhaps, but that would conflict with the second part of the legislation which cuts off assistance if the Palestinians actively support such an investigation – which, the administration’s arguments aside, can be inferred from the referral in the first instance and any subsequent cooperation. Indeed, it seems the legislation anticipated the possibility that the prosecutor might initiate an investigation proprio motu based on a request from the Palestinians, but never thought that the Palestinians might actually join the ICC. This is a strange assumption considering repeated Palestinian threats to do just that.

Nonetheless, the imprecision of the language has arguably opened loopholes that the Obama administration is all too eager to exploit. If Congress is to ensure that its intent is adhered to, it must improve its efforts.