Call It What It Is: Islamist Extremism and Terrorism 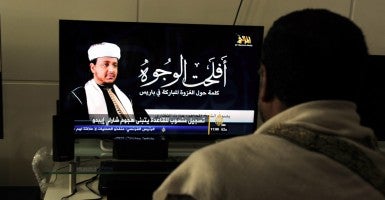 A Yemeni man watches news showing a picture of a senior member of al Qaeda in the Arabian Peninsula (AQAP). (Photo: Yahya Arhab/Newscom)

On Monday, Louisiana Gov. and likely 2016 presidential candidate Bobby Jindal will speak in London at the Henry Jackson Society about the treat of Islamist terrorism. It will be, in his own words, “blunt” and “clear.” “You cannot remedy a problem,” he says in his prepared remarks, “if you will not name it and define it.”

Jindal, as they say in London, is spot on.

Several years ago, The Heritage Foundation launched a multi-year, open-ended initiative called “Islam and Liberty.” The objective was to document and analyze the threat that political Islam poses to liberty around the world and to make recommendations for how the U.S. ought to address it.

The initiative has produced a number of major research projects. Analysts initially looked at religious liberty in the largest Muslim-majority countries in the world, Egypt, Indonesia, Pakistan, and Bangladesh. Additionally, we have published other reports to expand on our policy recommendations and to address changing circumstances and trends in particular countries. Heritage has hosted multiple speakers and guest researchers over the years, Muslim and non-Muslim, on the topic.

Most recently, Heritage released “Pursuing a Freedom Agenda Amidst Rising Global Islamism” and held a related public program to promote it. The report itself took more than a year of consultation to produce. It was thoroughly reviewed by a range of experts both internally and externally.

Very early on in the Islam and Liberty initiative, we wrestled with what to call the threat. We settled on “Islamist extremism and terrorism.” We did so because, on the one hand, through our experience with Muslim friends and colleagues over the years we know that the threat to liberty is not from Muslims because they are Muslims. The threat emanates from a particular extreme interpretation of the faith—essentially a violent political ideology cast in religious terms.

On the other hand, the threat cannot be honestly separated from its religious context. ISIS and al-Qaeda and the myriad of other violent Muslim extremist groups around the world may well be cults of murder masquerading as piety. However, we are not theologians. It is not up to us to say what Islam is and what it is not. When people kill or tyrannize populations in the name of religion, we must take them at their word.

We must because we are engaged in a war of ideas. One cannot combat a tactic, terrorism. “Extremism” alone is meaningless. Calling the threat “Islamist” allows us to distinguish friend from foe and empower the good guys. There are Muslims among our friends in this fight and enemies among non-Muslims. In the end, we only aid our enemies by not calling the threat what it is.