How Pro-Life Is Your State? This Map Holds the Answer 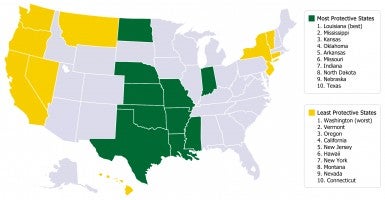 How does your state regulate the abortion industry? One pro-life group has released a map to help you find out.

“The abortion industry should … not be allowed to keep profits high and standards low,” says @CharmaineYoest.

Americans United for Life released the “2015 Life List” this week, ranking all 50 states based on their “overall advances since Roe v. Wade toward re-building a culture of life.” AUL analyzed abortion legislation and litigation in all 50 states.

The Life List is part of AUL’s 10th edition of “Defending Life,” a compilation of legislation and proposals that AUL considers models for the pro-life movement.

According to AUL, the most pro-life states are Louisiana, Mississippi, Kansas, Oklahoma and Arkansas. This is the sixth year Louisiana has earned the top spot on AUL’s list.

“In the last four years, states have enacted more than 200 pro-life laws protecting women and girls from abortion industry abuses,” said AUL President and CEO Charmaine Yoest in a statement. “Abortion advocates thought that an anti-life blockade in the U.S. Senate would mean an end to pro-life victories. But equipped with tools like ‘Defending Life,’ legislators and pro-life Americans worked together at the state level nationwide to protect women and girls from an abortion industry that puts profits over people.”

AUL said it timed the release of the list to be distributed “in advance of the anniversary of Roe v. Wade” and to “meet legislators’ needs as lawmakers reconvene.”

>>> This Year’s March for Life Spotlights the ‘Not Perfect’

AUL also released its “2015 Women’s Health and Safety Rankings” for each state, based on their regulations of the abortion industry. Sixteen states offer “moderate” protection for women and 12 offer “minimal” protection. They ranked 13 states as “dangerous.” Only nine states were ranked as “protective” of women. Yoest called the success of pro-life legislation at the state level a “game changer.”

“Consistently, AUL has developed innovative and constitutionally sound laws to protect women and their unborn babies. That trend continues today. The abortion industry should be put on notice that they will not be allowed to keep profits high and standards low.”