This Year’s March for Life Spotlights the ‘Not Perfect’ 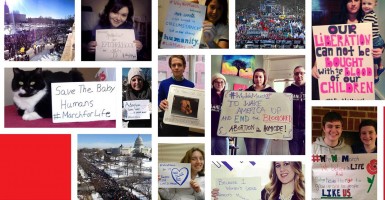 The 2015 March for Life will focus on a population at specific risk for abortion: those who receive a prenatal disability diagnosis.

The March for Life Education and Defense Fund announced that the “Every Life is a Gift” theme “seeks to draw attention to the pre-born populations that are at the greatest risk for abortion.”

For the past month, The Daily Signal has run a series on fetal surgery—a scientific development that has existed since the 1980s that allows doctors to fix certain birth defects before birth.

In an interview with The Daily Signal, Jeanne Monahan, president of March for Life, says such technological advancements buffer the argument that abortion is not the only answer to a poor prenatal diagnosis.

“All life is a gift,” Monahan said. “Even ones that are not perfect. None of us are perfect.”

.@jeannemfl says: “All life is a gift. Even ones that are not perfect.”

According to the Centers for Disease Control and Prevention, there are approximately 228 abortions for every 1,000 live births in the United States. That means nearly one-fifth of pregnancies end in abortion.

Monahan says the statistic is even more staggering for those who receive a “poor prenatal diagnosis.”

March for Life reports that anywhere from 60 percent to 90 percent of pregnancies with a “poor prenatal diagnosis” end in abortion.

Monahan cites advancement in medical technology—such as the evolution of fetal surgery—as resources that can help parents make a decision about how to proceed with a baby with a birth defect.

>>> From ‘Science Fiction’ to Reality: The Evolution of Saving a Life Before Birth

It kicks off with a rally starting at noon, with the march starting at 1 p.m. Confirmed speakers include leaders in the pro-life movement such as Rep. Cathy McMorris Rodgers, R-Wash., who has a child with Down syndrome.

The March for Life is a yearly event to protest the Jan. 22, 1973, Supreme Court ruling on Roe v. Wade, which legalized abortion in the United States.

Protesters march from the National Mall to the Supreme Court. You can learn more about the 2015 March for Life on its website and mobile app.

Every child deserves a chance at life — see you in January to march for life! #WhyWeMarch #prolife A photo posted by March For Life (@marchforlife) on Jan 1, 2015 at 9:07am PST