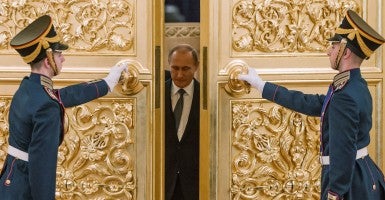 If we really knew what is going on in the Kremlin backrooms, where Russia’s information war is being planned, we in the West would be shocked, writes author Peter Pomerantsev in Politico magazine.

Audiences within the reach of Russia’s growing media empire are fed cynical media manipulation, hero worship of Russian President Vladimir Putin, rewriting of reality and psychological manipulation. Insider accounts of the workings of the Russian media empire are rare and offer highly valuable insights. Pomerantsev’s account is drawn from his new book about Putin’s Russia: “Nothing Is True and Everything Is Possible,” based on his years of working for Russian television.

Television in the Soviet era was a drab and dreary affair. But in Putin’s Russia, television is slick and full of drama, made with the help of young producers like Pomerantsev with experience in Western media. Pomerantsev himself had been a documentary producer for Western media companies, and was in 2006 drawn to Russia by the promise of its media explosion.

Examples cited by Pomerantsev of media manipulation under Putin include:

Now the recent aggressive advances of the Russian media empire have not exactly gone unnoticed, of course, especially since the Russian annexation of Crimea just under a year ago. In a recent interview, the former global director of the BBC Peter Horrocks stated that like the U.S. government broadcasters, the BBC has cut most of its radio broadcasts to Russia, leaving the field wide open for Russian propaganda. Since last February, the U.S.-funded Radio Free Europe/Radio Liberty has been scrambling to produce factual Russian language broadcasting into the Baltic States to serve as a corrective.

Information warfare in Russian hands is not a metaphor but a very real aspect of power and psychological warfare. The sooner we wake up to the real threat it poses, the better we can create a counterstrategy, at the heart of which has to be the U.S. international broadcasting complex under the Broadcasting Board of Governors. Reform legislation, H.R. 4490, was considered by the House of Representatives, but the Senate did not take it up. So this is an issue Congress still needs to address.