On Day One of New Congress, Obama Vows to Veto Keystone XL Pipeline 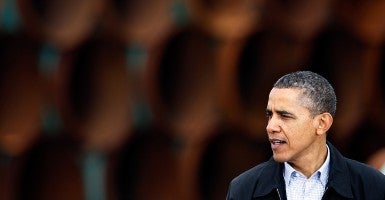 The White House said today that President Obama would veto the Keystone XL pipeline bill, which is supported by more than 60 U.S. senators.

“If this bill passes this Congress, the president wouldn’t sign it,” White House spokesman Josh Earnest said in a press conference.

The project, which would transport more than 800,000 barrels of oil per day from Canada to the Gulf Coast, is the first order of business in the new 114th Congress.

Earnest said Obama would not move forward with the legislation until a full evaluation of the project and its environmental impacts was completed.

Both the State Department and Environmental Protection Agency have been reviewing the plans for the past six years.

Ohio Republican John Boehner, who was just re-elected to his third term as speaker of the House, said the announcement was “simply another sign that President Obama is hopelessly out of touch and has no plans to listen to the American people or champion their priorities.”

Fringe extremists in the president’s party are the only ones who oppose Keystone, but the president has chosen to side with them. @SpeakerBoehner.

He said in a press release:

Jack Gerard, CEO of the American Petroleum Institute, the largest U.S. trade association for the oil and natural gas industry, learned of Obama’s veto threat while speaking to press today at the 2015 State of American Energy conference in Washington, D.C.

He too expressed disappointment with the president’s decision, saying “It doesn’t bode well for relationships between White House and Capitol Hill.” Gerard said:

The bill introduced this morning had 60 cosponsors on it — six Democrats along with all the Republicans, and we’re aware of at least three other Democrats who will vote for the bill. So you have a bill that essentially has 63 members of the Senate saying, ‘We’re for it,’ so I believe the leadership in the House and Senate are following the will of the American people, where 72 percent of the public says ‘we support building the Keystone pipeline.’

>>> Commentary: What the Left’s Scare Tactics on Keystone Pipeline Get Wrong

TransCanada’s Keystone XL oil pipeline – proposed to run from Alberta, Canada, to the Gulf Coast of Texas — has been one of the biggest bones of contention between the Obama administration and lawmakers in both parties.

The southern leg of the pipeline, spanning from Oklahoma to Texas, already has been completed. The U.S. government has yet to approve the northern leg, which would run from Alberta to Nebraska.

Sixty-seven senate votes would be needed to overturn a veto by President Obama.