This Sheriff Wants More ‘Outrage’ Over Abortion of Black Babies 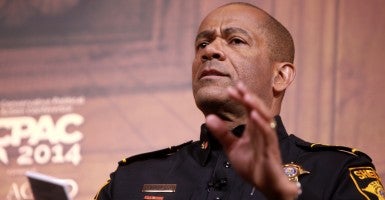 According to this sheriff, black lives matter—even the ones in the womb.

Milwaukee County Sheriff David Clarke has been a vocal critic of anti-police demonstrations in the wake of the deaths of Michael Brown and Eric Garner.

In an interview with CNN, Poppy Harlow asked Clarke if he sent the tweet, and if so, what he meant by it.

“When I hear these things that black lives matter, the only people who really believe that statement are American police officers who go into American ghettos every day to keep people from killing each other. All right, so, yes I did say that and I meant it. Look, the abortions? If black lives—if they really mattered, that’s where the outrage would be. That’s where we’d see protests.”

“When you see the black-on-black homicide that happens on a very frequent basis, we don’t see protests, we don’t see marches and we don’t see demands for change. So this has been a one-way conversation. So I’m just trying to present a counter-narrative to balance this thing and so we can have that discussion.”

The Centers for Disease Control and Prevention estimates that 36.2 percent of abortions in the United States are performed on African-Americans, who make up 12.6 percent of the population.