Putin May Have Just Lost One of His Best Friends: Angela Merkel 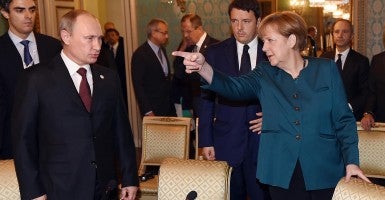 “Saturday Night Live” often acts as a good barometer of what’s going on in the world.  Last week, its opening sketch nailed just how grumpy Americans are over President Obama’s executive action on immigration, which kicks the rule of law down the Capitol steps.

If Putin has lost Merkel—and it looks like he has—then Moscow may be a lot less cheery this holiday season. It’ll be tougher sledding for Putin in the days ahead.

Throughout Russia’s sustained aggression against Ukraine, Merkel has tried to play the peacemaker between Putin and the West. Even after Moscow annexed Crimea, shot down flight MH17, and openly fought alongside a rebel insurgency, Germany has persisted in its quest to “work things out.”

What animates Merkel is not a consuming desire to land her own Nobel Peace Prize. It’s money: Germany has very powerful economic ties to Russia.

The chancellor’s plan was to sit down at the G20 and have a heart-to-heart with Putin. The Russian president, who speaks impeccable German, spent his four hours with Merkel playing rope-a-dope instead.

Merkel did not leave happy.

German foreign minister Frank-Walter Steinmeier fared no better at ministerial talks in Moscow. At the concluding press conference, he muttered this assessment: “There is no reason for optimism in the current situation….”

Putin doesn’t seem to care. He looks ready to go it alone, ignoring the concerns of foreign powers and concentrating instead on drumming up populist support at home.

Putin’s answer to being dumped by the Western powers has been to snuggle closer to Iran and China.

The Russian media machine is doing all it can to help, propping up Putin and sowing discord among his enemies with a steady bombardment of targeted messages, rumors, and mistruths. Moscow radio and TV, for example, are busy inflaming sentiment against shale gas development in Romania and Bulgaria, while simultaneously cheering on a gas pipeline project that benefits Russia.

Domestically, Putin plays to the crowd to whip up support. Russian youth appear to be particularly enamored with their president. A hip movement called “Set” is dedicated to dreaming up patriotic, pro-Putin swag that will appeal to others of their generation.

But in the face of growing isolation from the West, playing cool may not be enough to keep Putin going for long. Though he and his cronies may have more money than they can ever possibly spend, the same can’t be said for the rest of Russia.

Russian banks have about $192 billion in foreign debts and no few real assets to balance against them. The central bank recently announced it expects “zero” economic growth in 2015.

That’s not entirely due to plummeting oil prices and Western sanctions over the Ukraine. All of Putin’s foreign adventures—from propping-up Assad, to warring on Ukraine, to deploying bombers to dance around U.S. airspace—are taking a toll.

And Putin’s tit-for-tat “sanctions” against the West have only to put an additional brake on the Russian economy.

Just how badly is the economy performing under Putin?  The central bank’s inflation target for 2014 was 4 percent. Its already double that. And the Russian ruble has lost 42 percent of its value in just the last year.

If the economic news isn’t bad enough for the Russians, there’s more for them to worry about. Putin’s answer to being dumped by the Western powers has been to snuggle closer to Iran and China. Siding with a state-sponsor of terrorism saddled with one of the world’s worst human rights records and a ramshackle economy is no way to help the Russian people feel more secure. Neither is cuddling up to an outsized empire that promises to turn Moscow into a very junior partner.

Putin blustering may appeal to many Russians, but he has dealt them a bad hand. His policies have accelerated the decline of the Russian economy, and his aggressive foreign policy is likely to make more enemies among people who should be their friends and draw them closer to nations they should keep at a distance.

That kind of takes the cheer out of the holidays.

Here it America, it would be nice to be able to say, “That’s all Putin’s problem,” and just forget about Russia. But declining powers have a nasty tendency to make problems for innocent bystanders, too. Just remember Austria-Hungary in 1914.